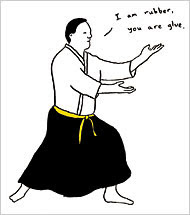 I'm passing along an article my sister sent me. Some may find something to object to in the article such as the “Vulcan Nerve Pinch” (never seen it in a dojo), or being labeled “bookish” dorks. But it is a humor piece so we can let that go, and of course it applies to me anyway.

One point it alludes to but doesn't address directly is “Why do we practice Aikido?”

I have never been in a fight and probably won't in the future. In the past I've been able to talk my way out of trouble much like the author of the article did I suppose. I wonder if I ever became good at Aikido would I be more likely to not talk and actually fight? This would be ironic since O'Sensei's realization was that Aikido is “not a technique to fight with or defeat the enemy. It is the way to reconcile the worl and make human beings one family.” (The Way of Aikido by George Leonard)

It may be I simply practice because it is so freakin' cool, even when you are bad at it.

Posted by ZeppoManx at 1:11 PM

Haha - yes - I read that too. I tried the vulcan nerve pinch on a kid I was fighting in the 3rd grade. Had him down and I was on top. A friend yelled "Bob, do the Vulcan Nerve Pinch". I tried it, and got punched in the mouth! haha.

So we can rule out the VNP as an effective technique.

I think it can be hard to reconcile the martial nature of Aikido with the talk of peace and harmony. I suspect it is our western mind-set that makes it difficult. Still, it IS a lot different that learning to kick someone in the face, eh?

I gather there are all sorts of motivations in aikido students and some are more martial than arts in some.

But the later writings of O'Sensei you see in books are all about love and harmony. I'm no judge but wonder how many advanced students study that?

I am intrigued by both the "philosophy" as well as the martial techniques.

I would be interested to know the effect of WWII on O'Sensei's ideas. He certainly had the opportunity to see destruction.

I think that I fall into the martial nature of aikido. I have seen some horrible things happen to people. I have been fortunate enough to know how to handle myself when I have been attacked, but I only had extremely brutal techniques at my disposal. I couldn't unite my religious beliefs with a real blood and guts approach to self defense. Turning the other cheek makes more sense than crushing and killing, and aikido falls somewhere comfortably in the middle.

Maybe it has to do with your intentions, in that if you use the techniques intending to dominate the attacker you lean to the martial side of Aikido and if you really don't want to hurt the person your response really does try to embrace and harmonize.

Meaning Aikido can be harsh and brutal but at least you see there is a way to use it less brutally if you wish and still resolve the conflict.

How quickly you forget the famous fight outside of " Stout Hall " with Baretta Arms. I think he is still sorry he messed with you. David

In my mind it takes two to have a fight. And in the case of my Stout Hall "battle" my freshman year at college...I literally "turned the other cheek", after I was punched on the right side.

Fortunately for my left cheek, Mr Baretta Arms instantly apologized for the first strike. And I, being a forgive and forget kind of drunk, accepted the apology and went back to my dorm room to pass out (not from the hit)