Another Morning and Another Bike Ride 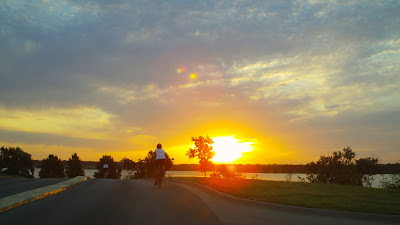 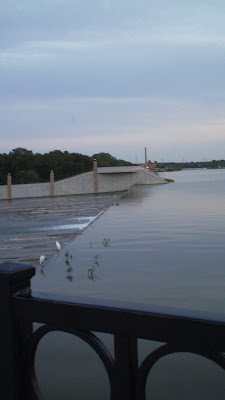 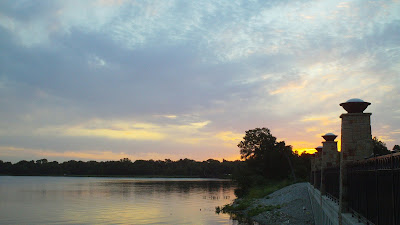 And now a short Video

Posted by ZeppoManx at 8:25 AM No comments: 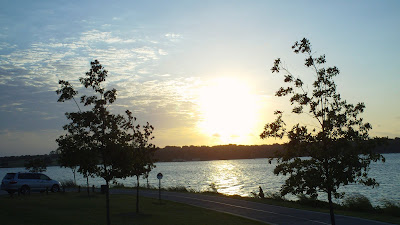 In my attempt to be less of a a plump middle aged man who is easily winded, I got out of bed and rode a leisurely ride around the lake.
Posted by ZeppoManx at 6:21 PM No comments:

What I Learned This Week 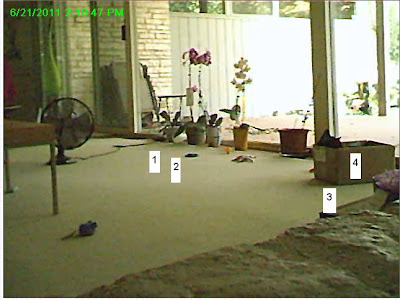 I did learn how to play around with my home network. I bought a fairly cheap wireless IP camera and figured out how to get it on my home network, configure my router with the appropriate port forwarding settings to allow access from the Internet. And how to use a free Dynamic DNS company that works with my router to allow me to buy a domain name for $6 a year (two year contract) so that as long as I have the camera on I can spy on my cats.

But the thing I really learned was that my cats don't do much of anything when I am gone.

Posted by ZeppoManx at 9:07 PM No comments:

The End of Days: Fundamentalism and the Struggle for the Temple Mount by Gershom Gorenberg


For a modest book it packed such an army of characters in the 250 pages that I have trouble remembering who was who. The book mostly talks about the Temple Mount / Dome of the Rock as the focal point for extreme religious energy.

In the U.S. You can get an earful of millennialism (pre-mil usually) just by scanning “Christian” tv, but I gather there is a strong current of Messianic thought in Israel which is just as intense if not more so than the Christian version. AND it turns out a there is a growing branch of this kind of stuff in Islam, which strangely has gained popularity only recently and seems to unknowingly pick up the same structure as Christian End Times enthusiasts.

Interestingly (but obviously if you think about it) each side sees the others as being the crazy ones. And it is a given for every evangelical view that the Mosque on top of the Temple Mount is a sacrilege, the Muslims feel the same about any encroachment on their holy site. But all three believe a final battle will come and God will clear away the other guys.

It is a triangle of zealotry with each side thinking in the end only they will be left standing.

My one sentence synopsis is...
“This book shows there is not shortage of crazies, be they Jewish, Muslim or Christian and if any of them get worked up enough they have no problem with all the other “non-believers” being blown away, either with guns or by God.”

Here are just a few quotes from a few of the pages I dog-eared.

By the time we get to Hal Lindsey deciphering those names in 1970 as referring ot Russia and the "Iron Curtain countries," who will invade Israel and might be destroyed by nuclear weapons, we have reason to wonder what is literal about the reading. The man who says, "I had those who read their ideas into the scripture by using allegory," seems as capable as any allegorist of reading what he wants into scripture. 245

A parable from the Jewish mystical tradition known as hasidism: A man was once walking through a forest at niht and came to a house . Looking through the window, he saw people flinging their arms and legs about in grotesque motions. How awful, he thought, they're having seizures, they must ball have a terrible illness, or perhaps they're mad. But the man outside the window didn't hear the singing inside, and didn't know they were dancing. If you don't hear the the music of faith, says the story, you'll see the dance as disease. To take the point further, if you don't pay attention to the particular song being sung, you may notice only "seizures"_ and not which dance you're see out of the many possible. 236

Beneath the sci-fi veneer, for instance, the Heavan's Gate dream of ascent to heaven looked a lot like the Rapture...

..(they) had been making apocalyptic predictions for years. They couldn't sustain expectation forever, so they had to take irrevocable action.”This is the ultimate dogmatism: Any price is worth paying save the price of admitting that the Idea was wrong. 227

View all my reviews
Posted by ZeppoManx at 8:53 PM 1 comment:

Franny and Zooey by J.D. Salinger


First off, I'm sure loads of people have read and reread this book or just know all about it from other references. But it was all new to me so it really took me by surprise.

This was recommend by a friend who was reading it for a church book club. I knew nothing about the book and very little about Salinger, but I checked it out of the Library just to take a look. I was warned the way of the pilgrim and the Jesus Prayer figured in but that was all of my preview.

I found the 40 page Franny section shockingly readable. It conveyed complex notions and subtle ideas in a very engaging narrative. Big ideas, deep emotions all in a weekend outing to see a college football game. I rate it wonderful!

The rest of the book, the Zooey section, was best when it referenced the first part and the other bits seemed to pack in a bunch of exposition or explanation or eduction or some other thing that I don't know the word for it. Don't get the wrong impression that I didn't care for it, I really liked it but I REALLY, REALLY liked the way the Franny part told the story.

I'm sure this is a goldmine of literary nuggets for students to write papers about, and I'm sure glad I can just relax and not worry about such things. I found a lecture online about this book and listening to it makes me a bit queasy.

View all my reviews
Posted by ZeppoManx at 3:28 PM No comments:

A Quiet New Beginning or Did Johnny Cash Have A Bucket List? 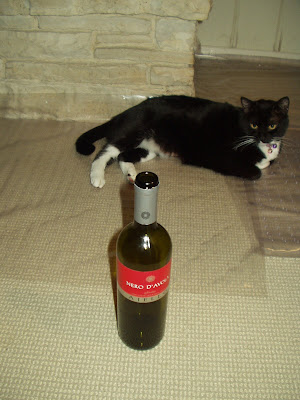 A quiet birthday and noting I am at 4 years of blogging. No bucket list this time, although I can think of things I'd like to do, but no lists.

Alone after work just some bread, goat cheese, tomatoes and olive oil, all with some Sicilian wine. Then I watched The Man Who Wasn't There . After that, surf the net while listening to Beethoven piano sonatas (prompted by a plot point in the movie)

In once sense the movie is cliched, like Stewie on Family talkng to Brian about writing his novel

How you uh, how you comin' on that novel you're working on? Huh?
Gotta a big, uh, big stack of papers there? Gotta, gotta nice litte story you're working on there? Your big novel you've been working on for 3 years? Huh?
Gotta, gotta compelling protaganist? Yeah?
Gotta obstacle for him to overcome? Huh?
Gotta story brewing there? Working on, working on that for quite some time? Huh?...
Been working on that the whole time? Nice little narrative?
Beginning, middle, and end?
Some friends become enemies, some enemies become friends?
At the end your main character is richer from the experience?
Yeah? Yeah?

OK not that cliched...but still after the early character setup you could kinda see how it would end, at least emotionally...however it all works,

The thing is...is it a sad ending? Or is the peace he feels at the end a validation of his life? Maybe that is the way we will all be at the end, an uncertain matter of debate.

I've been listening to A Bridge Over Troubled Waters, this past week and I just found this Johnny Cash version of the Title song which I think was recorded with Fiona Apple the year before he died. And he sounds like its near the end. Powerful, but near the end.

Posted by ZeppoManx at 10:46 PM No comments:

I don't know if Sensei has a structured lesson plan but in last night's closing talk he followed up on last Wednesday's session. Except this time instead of talking about deception he emphasized taking away the attacker's strength. Maybe better to say something like “diffusing” the attacker's power (my paraphrasing).

As an example he talked about a TV show that measured the strength of various martial arts kicks to see which was the most powerful. Apparently it is the kick where both legs are off the ground that is the weakest because usually power from the ground up through the body when the attacker has a good position.

Our goal in Aikido is to disrupt that connection. If somebody is pushing against you, don't meet force with force, but absorb just a little and then move out of that power center.

Sensei will try any analogy he can to get the message across, and last night he used the example of a herd of some type of wild cattle surrounded by lions. The lions know they can't charge in because they would be gored by all the deadly horns pointed at them. The lions must somehow tease out the weakest victim and he said we must do the same thing but taking the weakest part of the attack and guiding it away from the power center.

Usually the analogies involve softness and grace and not an attacking pride of lions, but I got his point.

I actually found a video of lions doing just what he described, but it is two hard to watch. Plus after the lions get the calf a crocodile almost takes it away from them by force. And then amazingly the crowd of buffalo get the calf back (http://www.youtube.com/watch?v=LU8DDYz68kM)


On another note, sensei told me to start preparing for my 2nd Kyu test. I guess I will plunge ahead but I still feel like such be a beginner