Ludwig von Mises was a D!CK

Ludwig von Mises is a hero to conservatives and Tea Party types, even though I seriously doubt any of them actually read his books. He may very well have some sort of brilliance but if you write this letter to Ayn Rand and say...

You have the courage to tell the masses what no politician told them: you are inferior and all the improvements in your conditions which you simply take for granted you owe to the effort of men who are better than you.

You know who the "masses" are, EVERYBODY! Definitely me and definitely anybody who isn't an Austrian economist or hack novelist.

Remember when conservatives went bananas when Obama point out, correctly mind you, that businesses did NOT build the roads and bridges they use? Well this is WAY worse.

So according to von Mises and Ayn Rand no matter what you have done in your business or as an employee of a business, your effort is just crap because you can't get a bunch of bozos to worship your elitist economic bullshit. 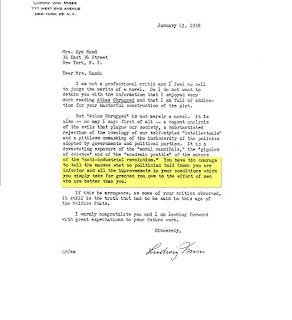 Interesting article by the "PaleoLibertarian" Murry Rothbard called The Sociology of the Ayn Rand Cult .
Posted by ZeppoManx at 5:09 PM 1 comment:

Faust and The Mandela Effect

I happened across this article by Wendell Berry from 2008, wherein he address the then pressing issue of "the end of the era of cheap fossil fuel". An now in the era of Elon Musk, Trump and the Libertarian faith based economic world view, it seem like a throwback to values long gone. Remember when greed was a bad thing? Or is that just an imagined memory along the lines of the psychological phenomenon known as the Mandela Effect*.

From the essay
The dominant response, in short, is a dogged belief that what we call the American Way of Life will prove somehow indestructible. We will keep on consuming, spending, wasting, and driving, as before, at any cost to anything and everybody but ourselves.

This belief was always indefensible — the real names of global warming are Waste and Greed — and by now it is manifestly foolish. But foolishness on this scale looks disturbingly like a sort of national insanity. We seem to have come to a collective delusion of grandeur, insisting that all of us are “free” to be as conspicuously greedy and wasteful as the most corrupt of kings and queens.

*MANDELA EFFECT: a theory that a large group of people with the same false memory used to live in a parallel universe (the name comes from those who fervently believe that Nelson Mandela died while in prison). [Essay] | Faustian Economics, by Wendell Berry https://harpers.org/archive/2008/05/faustian-economics/
Posted by ZeppoManx at 10:27 AM No comments: