Well, that only lasted a week (See previous posting).

But the upside is instead of lethargy, indulgence and general apathy, I only suffer from excessive laziness.

The photo is from a Kodak Brownie Bull's-Eye Camera dated from the mid 1950's it seems sunlight manages to seep in from some undetermined part in the camera. I should have known the missing screws on the front faceplate might cause a problem. 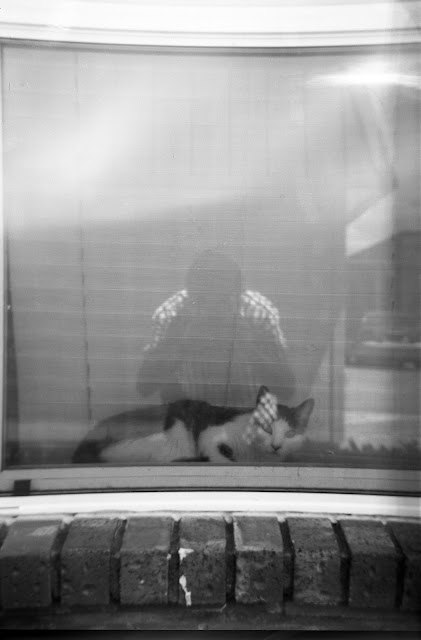 But I embrace this world of non-perfection even as I try to seek out the best, the most beautiful (or ugly) or just interesting photo, book, adventure...So that said, here is me reflected in the window while taking a picture of a cat. Notice the light leaks at top and the odd bowed nature of the window frame. I don't know if that is the cameras or the way I scanned the negative. But in this case I think the imperfections make it a much more interesting image.

If I were a film maker I would end up in the Ed Wood camp rather than the Martin Scorsese club. But honestly I am OK with that, just as long as I don't end up in the Stephen Spielberg zone.


*Wabi-sabi (侘寂) represents a comprehensive Japanese world view or aesthetic centered on the acceptance of transience and imperfection. I think I have used this point before, but it seems even more relevant now.

Posted by ZeppoManx at 2:59 PM No comments: