Googling Your way to Success

A while back my old-ish Chromebook kept telling me it was out of date, so I found on the internet how to wipe the Chrome OS and install some linux version on it.

Long story short, I had that for a while and it mostly worked but thinking I was smart I decided to try a different version (going from Lubuntu to Xubuntu)

Whoops...I found the install went well and fewer problems than before, until I discovered if listing to any audio for more than a few minutes it would be interupped by a minutes long monoton horn sound. You could not mute or stop it.

And then add this one line...

Then the minutes long "horn" stopped, and all was well
I just didn't want to forget this
Posted by ZeppoManx at 3:55 PM No comments:

I can't believe I never knew or learned and then forgot, but IF you have a DVD and you want English subtitles you can use Closed Captions. Assuming Handbrake has been adapted to rip DVDs (that you personally own)

Simply add the subtitles as a track from the Closed Caption option. 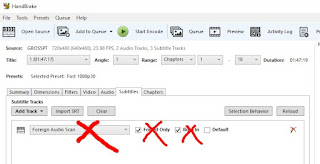 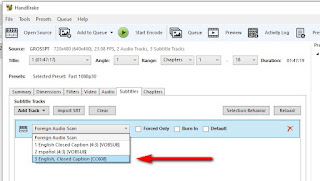 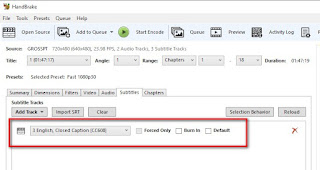 Posted by ZeppoManx at 3:09 PM No comments:

When Does Life Begin?

"When does life begin?"

Or more precisely, when does HUMAN life begin? THAT is crux of it all, and is a matter of tradition, convention, and opinion. To say that "Science" tells that human life begins at conception is rhetoric not science. That is not how science works, and to claim otherwise is to make it not just a an opinion but a theological opinion.

A zygote may contain DNA but that zygote is patently NOT a human and to declare when a human is “ensouled” is by definition theology since it deals with the soul (not science).

And current views about abortion are “relatively” recent and “conservative” religious thinkers once held other theological views.

St. Augustine declared that abortion is not homicide but was a sin if it was intended to conceal fornication or adultery.
https://pubmed.ncbi.nlm.nih.gov/12178868/

Resolution On Abortion, adopted at the SBC (Southern Baptist Convention), June 1971: RESOLVED, That we call upon Southern Baptists to work for legislation that will allow the possibility of abortion under such conditions as rape, incest, clear evidence of severe fetal deformity, and carefully ascertained evidence of the likelihood of damage to the emotional, mental, and physical health of the mother
https://www.johnstonsarchive.net/baptist/sbcabres.html

When the Roe decision was handed down, W. A. Criswell, the Southern Baptist Convention’s former president and pastor of First Baptist Church in Dallas, Texas—also one of the most famous fundamentalists of the 20th century—was pleased: “I have always felt that it was only after a child was born and had a life separate from its mother that it became an individual person,” he said, “and it has always, therefore, seemed to me that what is best for the mother and for the future should be allowed.”
https://politi.co/2JsQoNr
Posted by ZeppoManx at 9:18 AM No comments:

Labels: Think On These Things

Certainty in an UNcertain World

Thinking about why people entertain questionable conspiracy theories yet ignore actual documented and quite bad conspiracies throughout history. And thinking ther is a connection to some leaping from believing unproven (to my mind) conspiracies to wanting to take up arms to the point of violence to others. Below is some of me talking to myself

Conspiracies with ambiguous or tenuous evidence can prompt different paths of thought in response… but if you go “all in” and double down on the belief, it gives a “believers high”. AND the bigger the leap, the more complex the conspiracy, the more tenuous the claim, the better the emotional “high”

To believe in conspiracies there is a psychological Alchemy formula that is different for each person, but to end up with this “believer’s high” a key ingredient in the mental potion is the LACK of absolute proof. Perhaps it is the very act of “connecting the dots” that gives off some endorphin or hormone, but whatever…it requires a physiological response that allows emotions and reasoning to combine and produce the “sacred belief”. Once in place it allows someone to achieve a blissful state and exalt in self righteous confidence.

And once something becomes a “sacred belief” then contrary evidence, or illustrations of illogic actually harden the conspiracy in the mind.

It is this self righteous confidence that pushes away the ever present fact that to live,is to live with uncertainty, to live with ambiguity.

To be sure, there ARE conspiracies. Some with big government, or big corporations, or even biases of cultural worldviews. BUT conspiracies with clear, documented, evidence, don’t give the same “high”. So Iran/Contra, tobacco companies and cancer, oil companies and climate change, may be noted, then ignored. Those conspiracies are in a sense accepted and relegated to the mundane while JFK conspiracies,ludicrous voting claims, all with dots just waiting to be connected IF you only take off your blinders…THAT requires making a commitment, declaration of sorts, and this commitment gives back many times over with the emotional alchemy of turning ambiguity into certainty.

Interestingly it is the act of committing oneself to a belief in a vague theory wholeheartedly that makes the belief “real”. To believe you simply have to believe, THAT is where the fun is. Proof is not fun, connecting the dots IS.

On the violence of it all…to return to the psychological, once you have the confidence in the conspiracy THEN the next level of commitment is to hate some other. So once the leap to connecting questionable dots is done, then comes the audacity of HATE, and the more audacious, the more hate, the better the "high". To fuse self righteous certainty of a disovered injustice and blame it on somebody else takes another audacious commitment. To be self righteously confident of the injustice, AND to have that "other" as the cause of the injustice… Then all that is left is action. Sweet, sweet, self righteous action

I suggest that we live in an uncertain world, most knowledge is an illusion*, life is complicated, ambiguous, even contradictory. And almost everybody seems to have a different opinion on what the rules should be. And no one wants to submit to somebody else’s view.

So, how then do we live in a world with people who don’t believe what we believe and may actively hate us for some imagined injustice.

What then is to be done?

For me the starting point is Compassion for all things, including people. And that takes recognition from the start, I, like the world, am flawed…I want to be compassionate but fail so often.

But you have to start somewhere so I start with that.

Labels: Grand Theory of Everything, Think On These Things

Why Are People Doing This Crazy Stuff!!


Just trying to understand the society around me and thinking about people who believe "the Big Lie" as a rationilztion for even more crazy beliefs and actions...Came across this reseracher, Karen M. Douglas, and found this article online by her and some other people about why people believe in crazy conspiracy stuff (NOT theories in their minds)

These findings suggest that conspiracy theories may be recruited defensively, to relieve the self or in-group from a sense of culpability for their disadvantaged position. In keeping with this defensive motivation, conspiracy belief is associated with narcissism—an inflated view of oneself that requires external validation and is linked to paranoid ideation (Cichocka, Marchlewska, & Golec de Zavala, 2016). Conspiracy belief is also predicted by collective narcissism —a belief in the in-group’s greatness paired with a belief that other people do not appreciate it enough (Cichocka, Marchlewska, Golec de Zavala, & Olechowski, 2016). Groups who feel that they have been victimized are more likely to endorse conspiracy theories about powerful out-groups (Bilewicz, Winiewski, Kofta, & Wójcik, 2013).

"People are looking for explanations that help them cope with difficult situations when there is a lot of uncertainty and contradictory information. They might also be looking for simple answers that make them feel better, and conspiracy theories might seem to offer those simple answers."

The Power of the Absurd

I happened upon this and wanted to save it here for future reference. Another explanation of the in-explainable

Posted by ZeppoManx at 1:24 PM No comments:

I am a violence researcher and study the role of grievances and retaliation in violent crime. Recently, I’ve been researching the way grievances affect the brain, and it turns out that your brain on grievance looks a lot like your brain on drugs. In fact, brain imaging studies show that harboring a grievance (a perceived wrong or injustice, real or imagined) activates the same neural reward circuitry as narcotics.

Although these are new findings and the research in this area is not yet settled, what this suggests is that similar to the way people become addicted to drugs or gambling, people may also become addicted to seeking retribution against their enemies—revenge addiction. This may help explain why some people just can’t let go of their grievances long after others feel they should have moved on—and why some people resort to violence."