Since death alone is certain and time of death uncertain, what should I do?

The Father Who Mistook a Washcloth for His Sandwich*

So my 96 year old Alzheimer father fell and broke his hip. Before this fall off the bed he was able to stand up and walk reasonably well, especially for a 96 year old.

Backstory… his particular brand of Alzheimer allows him to mask, amazing well, how little he really understands. He maintains many common courtesies like “Hello” and “Thank You” or if asked if he can do something he automatically might respond “I think so” or “Oh, I don’t know”. The upshot of is that after the operation to repair his hip, as he is in bed he kept folding a white wash cloth repeatedly. He didn’t know why he was doing it, but it kept him from messing with medical monitoring leads taped to him so all the better we figured.

And at one point he folded it quite neatly and stopped and stared at it. He ended this round of folding so that his hands held it like one does with a big sandwich. So he stares at it and opens his mouth and starts to bite down on it like you do with any good sandwich. Obviously I stop him before it gets too ludicrous.

Disaster averted, so I start day dreaming. That morning us non Alzheimer people were talking about some robot receptionist and how these things will have very human qualities programmed in, to the point it will be hard to tell the difference between the robot or a person.

That reminded me of the Turing test which is a test of a machine's ability to exhibit intelligent behavior equivalent to, or indistinguishable from, that of a human. Which I always imagine will end with a Blade Runner like job for people like Harrison Ford to exterminate beings that are not human enough.

Which reminded me of two episodes of  The Twilight Zone where robots/androids think they are human but are horrified do discover they are just a mess-O-wires (The Lateness of the Hour and In His Image). 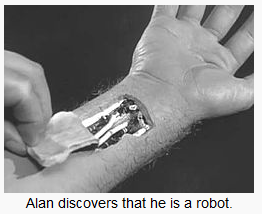 That blends into a Philip K Dick short story I once read where that lateness of time for an abortion kept getting longer since they just kept upping the age someone was considered human. In the story he had police type people chasing youths around town to “abort” them.

Which brings me to my final thought… What does it mean to be human? What if a computer program can pass the Turing test but you or I can’t? I am not making a big moral point about the sanctity of life (although maybe by accident). But from a purely practical matter, what constitutes being human?

Then for diversion I jumble all the above into an ill formed story idea. A world where humans and AI coexist and the only catch is all types of being have to be periodically tested (a la the Turing Test) to see if they are still human. Inevitably this leads to Human Testing prep classes, and Taking the Human Test for Dummies. Throw in some Logan's Run stuff and you got yourself a Sci-Fi classic


*(Hats off to Oliver Sacks)