Left and Right of Center

Tonight Charlie emphasized unbalancing the attacker's center and basically letting uke throw himself. I think we started with yokomenuchi for each attack and in one instance we entered early to catch uke well before the strike gets any momentum and then bring the other arm up like iriminage and then step through in the most unbalanced direction.

Charlie kept pointing out he was trying to have us realize that we were addressing uke's area of power and neutralizing it by either catching the attack before it got going or flowing with it and simply directing it. Often it was by simply stepping slightly aside and lightly guiding uke through the direction were you (nage) are not.

Then video shows the founder in 1935 and aroun the 30 to 40 second area he does some of the stuff we did tonight, although we were much slower.

As an aside I read in more than one place the ukes for the founder were shocked because they would attack as usual but "suddenly" find them self on the floor and not really know what happened. One guy deliberately tried to be more aggressive because he thought everybody was just playing nice with O Sensei, be he too was shocked to discover himself tossed like all the rest. So if it looks a little to staged in the video at least consider there may be more going on than mets the eye.

Posted by ZeppoManx at 11:40 PM No comments: 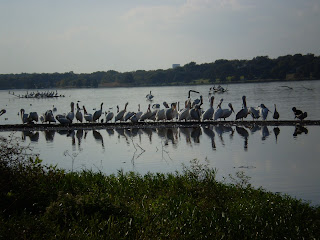 I was sick last Monday, something came up on Wednesday and relatives came to town on Saturday. So no Aikido for over a week.

Today I rode around White Rock Lake in Dallas. Above are the Pelicans and below the water dogs fetching balls in the lake. 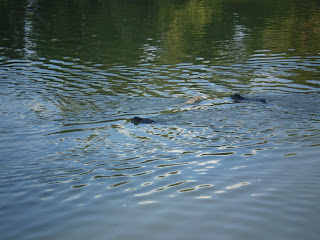 Posted by ZeppoManx at 7:59 PM No comments:

In The End It Is Always Kokyunage


KOKYUNAGE 呼吸投げ Breath throw. A cover-all term used to refer to a series of blending techniques with no common mechanical similarities

Saturday: Sensei worked us through some ushiro techniques starting with ushiro tekubitori (wrist grab from behind) and kokyunage and toward the end we worked on responding to kubishime (choke hold from behind) where I think we responded with Sankyo but stopped the kubishime after that.

After class I mentioned to Sensei that I thought he was leading us up to koshi nage. He admitted he thought about it as it is logical progression, but he decided to emphasize something else. He went on to say that you would use koshinage only if kokyonage was not an option. Then he dispensed this gem (to paraphrase)

“In the end it is always kokyunage”

He said you really only go (this is very much a paraphrase) with koshi nage when you must align yourself with uke to apply a technique but in a more pure approach kokyu nage would happen naturally and no such drastic maneuvers are needed. Then he pointed out that while strength is not a major part of koshinage it still takes more out of you than kokynage. He amended his cool aphorism allowing what you really want is the most appropriate technique for the specifics of the moment, but I think he meant that if you are aware you could generally position yourself so some kokyunage would be the easiest.

I don't think he meant this to be a special comment to me (the oldest person in the class) but he explained that when young you can use your strength with many techniques but as you age you are forced into wisdom since strength is not the option it once was, and that the goal is wisdom.

The second technique in the video above has an example of a the kokyunage we practice on Saturday, although when Sidney does it it is way smoother and way cooler.
Posted by ZeppoManx at 8:39 PM 1 comment:

I've missed a lot of Wednesday classes over the past months so I have not worked with Sensei as a partner in a long while so tonight I made a point of working with him. And I really think it is one the really cool things about the dojo, that the Sensei wants to (I think) work with everybody at an individual level.

He doesn't instruct or even correct (much) but he does take his time and tries to figure out what you are doing and how to make it better. It really is like a 10 minute private session with an Aikido Master. Charlie brought his Tomiki style background to the mat but so we did some things slightly differently but Sensei focused on the responsiveness of what I was doing and not whether the techniques were slightly different that had practiced in the past.

We were starting from a static katate-tori stance and went to shiho-nage. At one point Sensei struggled to get me to recognize the timing I felt as he grabbed my wrist (somehow we went to a more dynamic start), and helped me work on responding to his movements as I grabbed his wrist. He used the analogy of a metronome where the musician must pace themselves the beat that is give. But then he switch to saying that once you are in sync with uke then nage takes control of the speed, direction and pace.

At one point I think we spent 5 minutes of him grabbing my wrist, I tenkan and “feel” when I need to shift back and go to shiho-nage. We didn't complete the throw but just focused on me getting a sense of his timing and using that to move the technique along.

Anyway, it was a great experience. I hate to “beat a dead horse” but I can't help but wonder what a master of something must be thinking when all this wisdom comes out but can only go to a perpetually clumsy pupil. But he is never acts as if it is an imposition to explain and help us even though we seem to forget it the moment after he tells us something

We did some other cool stuff but the above video (around 1:09) show what Sidney and I worked on, although I didn't do the neat break fall in the omote version although he told me how I should position myself to did it if I needed.
Posted by ZeppoManx at 1:27 AM No comments: