Is My Aikido I.Q. Dropping?


This past Saturday I attended a short seminar at Aikdo of Dallas. The teacher was Peter Bernath, Shichidan (7th degree black belt) and Shihan (master teacher), so I guess he is a pretty big muckamuck
in the Aikido world. I don't remember too much except that it seemed like with more than a few things he had us work on, we had to make movements contrary to a common sense approach.

One example was a yokomenuchi attack where we had to slide in and to the side of Uke and turn around (putting our back to the attack for a short time) and then end up with the attacking arm in front of our face where we somehow went to Shihonage.

I don't know if it is seminars or just the Dallas dojo, but I seem to loose a few points of Aikido I.Q. Whenever I'm there. On Wednesday at Minneapolis I was able adequately perform Sankyo to a Katatetori attack, but with the thing in Dallas on Saturday I never got the hang of it. And I don't know what I was doing differently.

I'm sure I was a frustrating partner to work with since I was such a dunce. But it was still fun, and even though it was only a 3 hour seminar I was really exhausted by the end, and my body must have provided some sort of Edorphin shot, or something, because I felt great the rest of the day. Maybe life isn't just a lingering disease ending in death.

The clip above shows Skip Chapman talking about Yonkyo, whom I believe taught at the first seminar I attended. 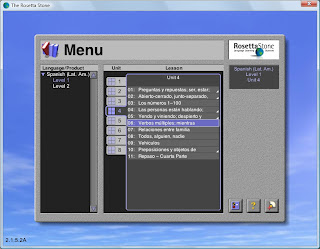 Note to self: You just finished Level 1: Unit 4: Lesson 6

As the title shows, this lesson had a few more verbs and threw in “mientras”. As usual I could more or less handle the vocabulary or at least get up to speed quickly but the speaking is really clumsy, as if I have gum in my mouth.

It had been so long since I last work on this I wasn't sure where I finished.

I see that my last Español entry was a month ago. My one time goal was to finish a Unit a week and so far I'm lucky to finish one lesson (of eight) in a week. But rather than whine about it I'll plunge ahead and simply try to do better, which in this case means faster.

The last month has been a bit hectic, what with work trips, family vacations and then I went and read a few novels. Of course a dedicated autodidact would find a way. I wonder if using an a computer program to learn still means you can call your self and autodidact?

At the start of this thing I proposed three things to fill my remaining years, but I never said I would ever get good at any of them. And so far I'm pretty weak on all three counts. I'm not going to worry about it for now.

There is a chance I will never be good at any of these interests and I don't know if that is pathetic, wise, silly or just neutral. Just because you are interested in something doesn't mean you are good at it.
Posted by ZeppoManx at 11:11 PM No comments:

I am in Minneapolis tonight and practiced at the Twin Cities Aikido dojo. We worked on Katate Tori with a number of Kokyu Ho responses. Most people were more advanced than me, but I comported myself without too much embarrassment.

Interestingly I saw that there was a picture of Akira Tohei Shihan on the wall. And somebody before class mentioned him, and then the Sensei mentioned him three times I think. Tohei Shihan is a presence at the Dallas dojo and of course at Midwest Aikido but I don’t remember anybody mentioning him when I was in Chicago. 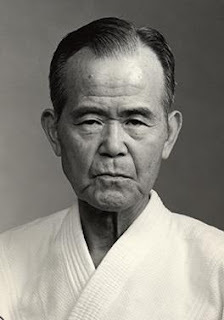 Posted by ZeppoManx at 1:14 AM No comments:


Here is the last lesson of six from the on-line Anime Studio Pro class. One might think it is not much, but for the $20 and the time I put into it I think it worked out well. Even though it is still simple and nothing special, the course covered many of the fundamentals and the exercises were appropriate for someone new to the application.

My plan is to have something to show worth showing in a few months time.
Posted by ZeppoManx at 10:26 PM No comments:

Koshi Nage With A Twist


Today we worked on some ushiro often with kubishime and we did two types of Koshi nage from there, which were amazingly simple. The video above shows one type, but the other was even easier where you didn't pass their grasping hand over you head. You simply grabbed Uke's arm that was wrapped around your neck and shifted your weight down and to the side and bingo, Uke is un-balanced and on the side of your hip. You shift your weight up and twist a bit, and Uke rotate/flips over like magic.

The easiest Koshinage I've ever seen or done.

I wish we would have switched partners and tried again as I'm curious how it would work on different body types. My partner was shorter than me so it was easy to get him on my hip when I stood up slightly.

On a side subject, well more a sore leg subject, I stopped riding my bicycle around the lake these last few weeks since that seems to make things hurt after the ride. But I thought my inner leg muscles were in good shape today, and class was fine. But afterward I walked like a really old man. I heard of one aikidoka (aikido practitioner ) who spends ½ an hour a day stretching so there are no problems with the Aikido practice.

It sounds like a plan, if I ever recover fully. Although that sounds like just the kind of thing I would have a problem putting into practice.

FYI, Spanish has really fallen to the “back burner”, but I plan to keep going when I have the chance. Animation is still in action so 2 out of 3 isn't bad.
Posted by ZeppoManx at 8:24 PM No comments:


Tonight we worked on many ushiro attacks of which toward the end we practiced koshinage that was a transformed ikkyo, in that we could have easily ended the technique with ikkyo rather than koshinage.

But I want to make note of Sidney emphasizing that we needed to “Listen to what Uke is saying to you and not what you are saying to yourself”.When Sidney speaks with his so soft voice you really pay attention. It is hard to integrate into your practice but you really feel you are getting a sense of the whole Aikido “enchilada”. He talked about this after class and a few of us hung around to listen. You really get the sense he is trying to honestly pass along what he has learned.

After a year and a half I'm still excited about practicing Aikido, and I enjoy practicing at other dojos when the opportunity arises. I don't know of any reason to suspect this might happen, but if Sidney left and I had to practice at another dojo, I don't know if I would keep with it. Probably, but thank goodness I don't have to worry about that.

I tried but failed to find that particular type of koshinage we practiced, so the above is a clip of Kisshomaru Ueshiba demonstrating ushiro tekubitori ikkyo.
Posted by ZeppoManx at 11:51 PM 2 comments:

Never tell the Sensei you're tired! 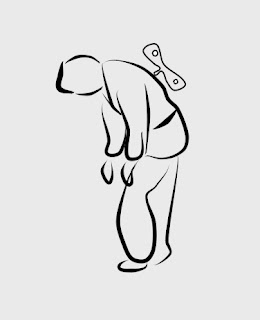 Sidney Sensei taught today and we worked on a few ryotetori techniques. A very small class of 4 adults 1 child and Sensei.

My favorite was ryotetori kotegaishi where all you do is bring one of your hands in front of you and place your other hand on Uke's wrist and apply kotegaishi. No footwork to speak of. Anyway, when it works it is almost magical.

I've been on vacation for over a week with no exercise, so I was pretty whipped by the half way point of class. My partner at the time had to attend to a visitor of some such thing, and I hoped this would give me chance to take a break and recover. As I started to head towards the sidelines Sensei looked at me and I said “I'm tired” thinking this would seal the deal on my rest time.

He immediately motioned that I should work with him. Working with Sidney ALWAYS wears me out. But he thought this was the perfect opportunity for some much needed special instruction. For the next 15 minutes he tried to teach me that if you are tired the best thing to do is to not fight the techniques but relax and basically give yourself totally to the moves. He showed me how fighting wears one out and that if you are relaxed you can actually rest in the midst of the action.

And I “Got It”, mostly. I could see his point and I know I kept resisting, but even though I tried to relax I have always had a problem with that part of my practice. Boy was I tired afterwards.

So, even though I say “ Never tell the Sensei you're tired!” I don't mean it because if you have a teacher who is always looking for ways to help you, advice comes at the most unexpected moments.
Posted by ZeppoManx at 5:38 PM No comments: