Tonight I went to MKZC (The Maria Kannon Zen Center) and spent 90 minutes sitting in an almost lotus position (with short silent walking breaks every 30 minutes).

Back in the 90s I spent 7 years or so regularly sitting on my own and going once a week to the Zendo and the occasional retreat (aka sesshin). So after being away for nearly 8 years it was interesting to get back in the sitting swing of things.

The teacher (Ruben Habito) was there tonight and offered dokuson (individual interview) so I took advantage of this treat. The ability to have one on one time with an official Zen Teacher who has the “Imprimatur” to teach from Zen masters is really quite amazing. Who would think Dallas, TX would have such an opportunity?

The ritual of going to dokusan adds weight to the activity but since Ruben is so welcoming you are instantly at ease.

MKZC follows a relatively modern lineage in that it officially started in 1954 which is WAY new as far as these things go. The founder is famous from Roshi Kapleau's Three Pillars of Zen. The twist for Sanbo Kyodan is that it blends the two main types of Zen, Rinzai and Soto. Rinzai is best known for the use of the zen riddles called koans while Sōtō usually just focuses on “just sitting” or “Shikantaza”

I don't know if I'll totally switch my Wednesday routine form Aikido to Sitting, but I will probably at least return next week

Posted by ZeppoManx at 11:48 PM No comments:

Sensei is spending much of the summer in France and Charlie and some of the brown belts have been teaching the class in his absence.

Last night we had a big class in a small room and a we had a lot of pretty new people. I've be at it for about 3 ½ years and still think of my self as a beginner so I sometimes feel strange commenting on a partner's technique. That plus the idea that for the most part you are supposed to leave the teaching to the teacher.

Interestingly I've found that sometimes the newer students want to give the most advice. Charlie has sometimes explicitly told us as a group it is impolite for a junior student to tell a more senior student what to do, but I don't really care. I think the more you practice you develop a sense of humility since you seem to frequently discover you didn't know as much as you thought and if you go to different dojos the same technique can vary quite a bit.

When I've questioned Sidney on why a different teacher seems to have a different approach he usually says the other technique if fine but it implies a slightly different attack by uke in which case the slightly different work by nage is appropriate. The upshot is you shouldn't assume anything but be open to learning at all times.

All that makes me slow to correct anybody, but you want to help when you can. So you just have to strike a balance and maintain your own “beginner's mind” when working with a beginner.
Posted by ZeppoManx at 8:13 AM No comments: 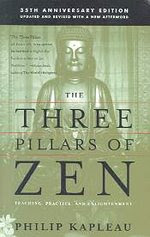 I missed class again today. I just felt too crummy to motivate my old keister to class.

I was thinking about a story from my "Zen Years" which comes from a story in The Three Pillars Of Zen by Philip Kapleau about Enyadatta...

Enyadatta was a beautiful maiden who enjoyed nothing more than gazing at herself in the mirror each morning. One day when she looked into her mirror she found no head reflected there. The shock was so great that she became frantic, rushing around demanding to know who had taken her head. Though everyone told her, “Don’t be silly, your head is on your shoulders where it has always been,” she refused to believe it and continued her frenzied search.

EnyadattaHere I will interject a commentary from Roshi Yasutani before proceeding with the allegory:

This “head,” of course, corresponds to the Buddha-nature, to our innate perfection. That they even have a Buddha-nature never occurs to most people until they hear Shujo honrai hotoke nari — “All beings are endowed with Buddha-nature from the very first.” Suddenly they exclaim, “Then I too must have the Buddha-nature! But where is it?” Thus like Enyadatta when she first missed her head and started rushing about looking for it, they commence their search for their True-nature.

At length her friends, believing her mad, dragged her home and tied her to a pillar to prevent her harming herself.

Slowly her friends persuaded her that she had always had her head, and gradually she came to half-believe it. Her subconscious mind began to accept the fact that perhaps she was deluded in thinking she had lost her head.

Suddenly one of her friends gave her a terrific clout on the head, upon which, in pain and shock, she yelled “Ouch!”

“That’s your head! There it is!” her friend exclaimed, and immediately Enyadatta saw that she had deluded herself into thinking she had lost her head when in fact she had always had it.

When this happened to Enyadatta she was so elated that she rushed around exclaiming, “Oh, I’ve got it! I have my head after all! I’m so happy!”
Posted by ZeppoManx at 9:40 PM No comments:

Last night Charlie worked on the idea of Sen No Sen by which he means an early response to an attack so you prevent the attack from reaching it's most force. And along with it he worked in the notion of Atemi as “90% of Aikido”.

I think this may be a fundamental difference between Charlie and Sidney Sensei. For instance in irimi nage Charlie almost always teaches the early entering where you step in front of uke to stop the advance of the attack.

While Sidney almost always teaches a version that has a has you step to the other side and let the attack play itself out. You tenkan, swing uke around and then go to irimi.


If asked, Sensei will point out the the ending of both is the same, but he feels that if you learn the longer version you can use the shorter version with ease.

Regarding Sen No Sen I found this link http://www.aikidojournal.com/article.php?articleID=600

The Founder’s concept of aiki strategy goes far beyond the dimension of psycho-physical confrontation. In an interview conducted in 1957, he expresses the concept in these words:
“It is not a question of either ‘sensen no sen’ or ‘sen no sen.’ If I were to try to verbalize it I would say that you control your opponent without trying to control him. That is, the state of continuous victory. There isn’t any question of winning over or losing to an opponent. In this sense, there is no opponent in aikido. Even if you have an opponent, he becomes a part of you, a partner you control only.”

If I were to quibble at all (which I would never do in class) it is that an emphasis on Atemi or Early attack is totally legitimate I think maybe with our western view of things we naturally associate these ideas with “force”, which I don't think O' Sensei really meant (boy is that presumptuous of me!).

Where Ueshiba think such things as control without controlling, we can't help of think that controlling is...well Control
Posted by ZeppoManx at 10:46 PM No comments: 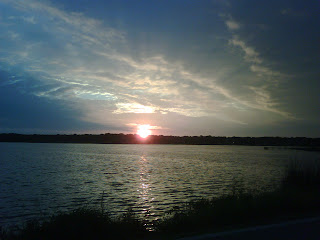 I rode around White Rock Lake in Dallas this morning. Above is a picture of the sun coming up today
Posted by ZeppoManx at 7:27 AM No comments:


I missed Monday and Tuesday Aikido because of familial commitments and there is no class today, so I will have missed a full week.

With my new hinges on my thinkpad I have a renewed affections for the thing. It feels like new.

I'm still playing with Ubuntu and while it can be frustrating you feel like you are having a little adventure. But the irritations are....well, irritating. Today I wanted to upload a ultrasimple animation I mad this morning in Synfig and I thought the error I got when trying to upload to YouTube was the Ubuntu video editing software (KdenLive), so I tried many settings. Finally I tried uploading it in FireFox instead of Opera (another experiment).

Opera seems to view videos better than FireFox but it cannot upload to YouTube but FireFox does. FireFox cannot see Videos of The Daily Show, but Opera can. This seems to reflect my Linux experience.
Posted by ZeppoManx at 9:10 AM No comments: