Tonight's theme at Aikido was to let the movements flow and the example Sensei used was the gymnasts who twirl the long ribbons circling around as they perform. We were to emphasize the flowing nature of Aikido and the ribbon gymnasts can't make square movements. Rather it is either a flow or nothing.

But the memorable quote came when he was trying to get us to stop fighting when uke made the attack. So he came out with “Fight Less Harmonize More”.

Posted by ZeppoManx at 11:09 PM No comments:

Check out the piernas on that mujer! 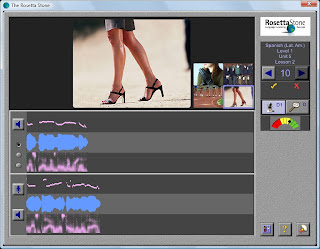 Note to self: You just finished Unit 5 Lesson 2

In Italian legs are sometimes called "gambas". Somehow in English it just sounds better to say “check out the gams” rather than “check out those piernas”. In this case Italian wins the English slang contest.

But then again I may be one of the few people in Dallas that has an interest in 1930's slang. In which case my judgment is worth even less than the virtual paper it is written on.

Again it was so easy I should really be plowing through these things.


Feeling nostalgic for an age you see only in movies? Check out
http://home.earthlink.net/~dlarkins/slang-pg.htm

http://xroads.virginia.edu/~MA04/hess/Slang/slangsplash.html
or
http://www.paper-dragon.com/1939/slang.html
It could come in handy if you are ever in a clip joint lookin for some hooch but there's a shamus on your heels and your gat is out in your flivver.
Posted by ZeppoManx at 9:50 PM 2 comments:

Saturday was tanto dori (wooden knife practice) and after a few techniques Sidney Sensei had uke put the tanto to the back of nage at which point nage picked a side to swing around and choose the type of technique to use in response to the attack. Basically if you turned around and your chest is vulnerable, you went for nikkyo. Otherwise you went for kotegaishi.

But the point of the exercise wasn't clear until Sidney announced we had to responded the moment we felt the tanto touch our backs. Up to this time I was basically trying to remind myself what I might do and then turn around and pick the response. But Sidney's point was that we had to get used to responding at the moment of attack. We didn't have to perform the technique quickly, just start quickly.

It was really a neat experience, and reminded me why I practice Aikido. Not to to win (although that would be nice), but to to respond.

The video has some examples of some of what we worked on, although it is a bit flashier that our examples.
Posted by ZeppoManx at 12:56 AM 1 comment: 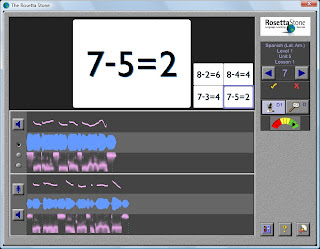 Note to self: You just finished Unit 5 Lesson 1

Boy was that easy! I should have done this weeks ago. I'm just too darn lazy.

It's about a month to the trip to Spain. I'm sure it will be fun, but there is the temptation to just take off on my own and see where the bus or train can take me. Forget quality time with relatives.

But, I'm just too timid for such actions. Still it is a whole different country and who knows what might happen.
Posted by ZeppoManx at 9:47 PM No comments:

Tonight we were working on katatetori Ushiro Tekubitori Kotegaeshi
and Sidney Sensei came over and demostrated that I was resisting Uke's grasp. His point was that for this technique to make any sense Nage must remove all resistance and lead Uke around to tempt him into grabbing the other hand. When he had me grab his wrist it was really amazing, as if by magic I was drawn around his back. All by the way he lead me at just the right pace.

Later we switch to shomenuchi irimi namge. Initially I groaned to my self, since this move as uke is something I've always had trouble with. But while working with Sean initial Iwas able to lower my center and actually flow a bit. I think I actually surprised him to the point he commented on it. But, either that jinxed me or he changed his irimi, but sunddenly I was stiff and resistant again.

Maybe someday it will last longer.

Posted by ZeppoManx at 11:49 PM No comments:

My Life As A Non Reflexive Verb


.
Today we worked from katate dori (wrist hand grab) and during some “one on one instruction” Sidney took the time to point out that he was trying to teach us to react naturally but NOT by reflex. Again he was hoping we learned the essence of Aikido and not just some technique. At multiple parts of techniques he tried to get us to stop anticipating what would happen to us as uke. It looks like you find the essence of Aikido mostly as uke and not so much as nage who is administrating the move.

The video only relates to the word reflex, since my time in the 80s programed be to think of Duran Duran whenever I hear the work “reflex”
Posted by ZeppoManx at 11:04 PM No comments: