Aikido; It's Not About You! 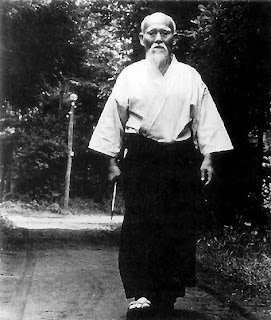 Last Night we were working on an exercise with a Yokoman (side strike to the head). And as the swing came in you were supposed to not step back but step to the side along the direction of the strike but somehow shift back at the right time to avoid the actual head strike, and THEN be in position to apply any number of techniques. ...Or something like that.

ANYWAY, after class I was talking with Sensei and telling him something to the effect that I could not do all those things whenever just a practice slow strike is come to my head. Immediately he said..

He went on to elaborate that in Aikido it is about seeing and feeling what the motion is and getting in sync with that and only then apply some technique. You see the invisible line of an attack and you match the speed and direction. Otherwise it is a conflict that ends in violent confrontation.

But the phrase “It's not about you!” is what stuck in my head. There is a famous story about the founder of Aikido, who after and intense workout had an overpowering revelation that in a battle there was no opponent

I found this quote

Opponents confront us continually, but actually there is no opponent there.

And this reminded of way back when I heard a Zen talk and the teacher kept emphasizing that while we all have different lives, experiences, likes, dislikes, etc...Actually we are all connected, so connected that even though there are all these differences we are all one, and one not just with each other but with birds, dogs, chairs,rocks, all of it.Although I sometimes got a sense of that I never broke through to really experience what he was talking about.

BUT, it does seem to apply to Aikido, in that it is NOT about me learning and applying some technique and being a martial arts bad-ass. It is really about giving up yourself and being part of whatever the event that is happening and simply doing the most natural thing. You have to let go of your ego and not be locked seeing things from your perspective, and maybe not even from the attacker. Simply see the lines and direction of the moment and respond naturally.

When was the last time you were choked?

Today for part of the class we maybe turned Aikido on it's conventional head. One would strike to the head and the other would get out of the line of attack and then from behind grab across the throat and choke the attacker. (FYI Aikido means the Way of Harmony)

So....one time Sensei comes to show what we were doing wrong and he demonstrated on me. And I know he was only showing but even with that, when he gave a tug across my throat I felt/heard a pop. Anyway, I still feel my neck.

As an aside, on Wednesday Sensei was demonstrating Ikkyo ( #1 technique) , which by the way we worked on the entire class, and he again was using me to show something. I made a strike to Senseis head and the next thing I knew I was on the ground. I know what happened but I just didn't feel it. I didn't feel him redirect my strike, didn't feel him grab my arm, I didn't feel anything.

My point today is what a strange but special thing it is to practice Aikido. When was the last time somebody actually choked you and you REALLY felt it? And I remember reading about people being ukes for O'Sensei (the founder of Aikido) and commenting that they were shocked that they could not feel the technique he used.

These things are special.

Posted by ZeppoManx at 12:13 AM No comments: 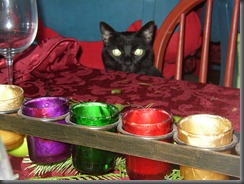 I installed Windows 7 Yesterday and there is an app in the Windows Live suite that connects to your blog.

I started in June of 2007, and three years later it is still here if a little more condensed and infrequent.

I thought of offering up my latests hair-brained scheme of a one year plan to learn Italian and a my strategy of contained gluttony. But the motivation cycle is in a downturn so I'll not mention either of those.

I had a blog post in mind from Aikido class last night, but the power seemed to short out of that grid.

Instead all I have now is an attraction to depressing quotes...

“Religious fundamentalists see themselves as having remedies for the maladies of the modern world. In reality they are symptoms of the disease they pretend to cure. They hope to recover the unreflective faith of traditional cultures, but this is a peculiarly modern fantasy. We cannot believe as we please; our beliefs are traces left by our unchosen lives. A view of the world is not something that can be conjured up as and when we please.”


“Darwinian theory tells us that an interest in truth is not needed for survival or reproduction. More often it is a disadvantage.”

“Science has been used to support the conceit that humans are unlike all other animals in their ability to understand th world. In fact, its supreme value maybe in showing that the world humans are programmed to perceive is a chimera.”

from Straw Dogs by John Gray (not the men are from mars John Gray)
Posted by ZeppoManx at 11:53 PM 2 comments: