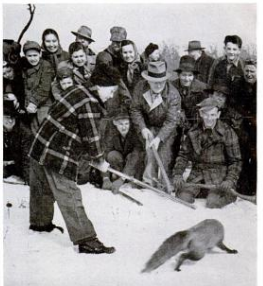 A few years ago (may 7 or 8 or even 10 years) I read some wacky collection of liberal Catholic sermons where one homily quoted a Life Magazine article about a small town in Ohio that swarmed to the countryside to flush out foxes and then they beat them to death.

Anyway it sounded so outrageous that I tried to track down the article. Way back then the Internet didn't help at all. Yahoo failed me! So I found the nearest library with Life Magazine on microfiche since the only clue I had from the sermon was that it was Life magazine in the 1940's.

I went to the Richardson, TX Public library and opened the appropriate Readers Guide an tracked it down. I paid my dollar or so to print it out and the afternoon was complete.

BUT, I neglected to print or write down the date of that issue and I've always wondered if I should go back to the library and find it again. But I never did.

Then, this morning I was looking for something that I don't remember and landed on Google Books and saw a link for Life Magazines. It turns out Google Books has most of Life magazine digitized and within a few minutes I found the issue I spent an afternoon investigating years earlier.

Of course I had to spend the next hour or more tracking down ways to hack Google Books so that I could download my find. It is harder than I would have thought, and Google won't let you print all the great stuff.

My point is that, Wow, all I had in school all I had for reports was the World Book Encyclopedia. But now that I think about it I could have gone to the library if I had put out some effort. As with most things, I had better student study habits AFTER I was out of school.

And for today's bonus here is an ad from 1944, and I have no idea what it means. 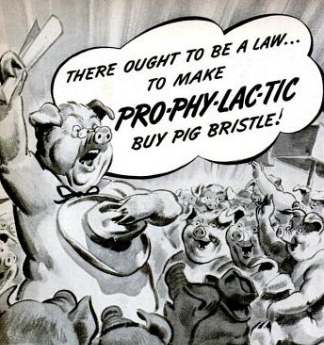 Posted by ZeppoManx at 4:08 PM No comments:

An Attack on the unthinking beliefs of thinking people

Straw Dogs: Thoughts on Humans and Other Animals by John Gray

This is "an attack on the unthinking beliefs of thinking people".

I gather he intends it not to be a well laid out logical presentation of how Humanists, liberal humanism and the idea of progress,have it all wrong. But instead is a collection of witty observations from a philosophical Oscar Wilde. And many of them really are clever and disarming and probably a few are even true.

My only problem is that he has no problem painting the subject he is skewering in it's most unreasonable light. That and the fact that he has quotes but no attribution. (there is an full “recommended reading” section at the which we can only assume references all the quotes he had). Plus he never really says who these humanists are. Maybe if I was around upper crust academia I would know who these humanists are that have some an idealize view of the perfectibility of man. But I'm not so I don't know anybody who things humans are on the road to perfection by virtue of their positivistic approach to life. And from my casual fascination with protestant super religious types I really think he misses the point on their world view. He implies they are somehow at war with science, but actually they claim it as their own and accept all the technology with joy but deny anything that might intrude on their personal bibilcal stores. In fact they believe science proves the literal bible rather than challenges it. They may be crazy but that is what they believe.

It was refreshing to see him discount Kant an Heidegger with only a few paragraphs on each. I guess I don't have to worry about feeling bad that I never read that stuff. But he also dispatched any mystical religious figures with only a few sentences which saddened me a bit.

I guess my takeaway form the book is that any idea of progress is bunk and the more we accept that we really are machines, the less stressed out we will be. All in all I'm glad I read it and I may even read it again sometime soon .

View all my reviews
Posted by ZeppoManx at 7:46 PM No comments:

Paying for It by Chester Brown
My rating: 3 of 5 stars

Interesting but passionless graphic memoir about being a “John”. Given his declaration of the failure of romantic love (at lease for him) I suppose it is natural that this who story is passionless. Chester Brown is a very analytical kind of guy, even when dealing with his...well, with his penis. Even at the end where he admits having feelings for and being (at least on his part) monogamous with a prostitute it is very thought out and clearly decided upon. I suspect, but don't know, that he is a libertarian of the Randian ilk since his thinking is what I think an “Objectivist” is like.

But there is really only one part that directly points to a libertarian world view , where he is discussing with Seth the morality of prostitution and mad thought balloons erupt over Chester's head as Seth presents some straw man argument against prostitution. Up to that time the graphically presented conversations for and against paying for sex were at a personal level and seemed more honest. I get it, you have to put up with your “liberal” friends and their faulty thinking.

So, I liked it. But 200 and some pages of very controlled drawings about how you came to know and use hookers is a strain. He is a different type of cartoonist (I hope he doesn't mind the term). I think of comic books, graphic novels and such as a medium of some exaggeration but with Brown it is the reverse. So maybe it is just me rebelling against what I see as going against the whole reason for telling stories in a ”comic book” format. I think all the frames are the same and the margins are so big it makes the graphic flow seem all the more distant. And the type is so small I feel like reading with a magnifying glass, although that might be because my eyesight is growing worse.

Thinking about the book I feel the visual story telling is better than I first thought, probably since the feel of the book is so analytical that you might miss that it is graphically told.

The thing is, I heard him interviewed and he told of as a teenager wanting to drawing superhero comics which I see as very expressive and often over top or even “cartoon-ish” in their expression. But this book has the feel of a an emotional star collapsing in on itself with all emotion and passion becoming more and more compressed and restrained. Then there are all the hand lettered footnotes about prostitution which I skipped. The felt like it was just him trying to justify his views and actions, but why bundle that with a bunch of drawings. But, that is just me.

Just after this I read Stitches by David Smalls, which is a wildly different book (review to follow) but I felt like he really used drawings as an integral part of the story telling. But, still..read this book.

View all my reviews
Posted by ZeppoManx at 4:59 PM No comments: