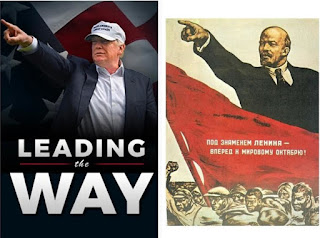 Another Bookmark for a future post.."Conservatives" as true Leninist

Since hearing Steve Bannon's claim in an interview to be a Leninist, I wondered what he meant but until now had not followed up on it. I've been reading Democracy in Chains and there are quotes in there by founding members of libertarian think tanks like Cato and Heritage that also claim to be be leninist

So when reflecting again on the Bannon quote now, I assumed he meant political actions as multi faceted attacks on all aspects of politics and culture. Basically not just win votes or change minds but to control all possible avenues of influence. I may have puzzled out part of it but this googling found article seems convincing and has a bit more to it.

Sephen Bannon, President Trump’s chief political strategist and, after Trump, the most powerful man in Washington, once declared proudly: “I am a Leninist.” He was talking to a New York university academic who had written extensively on communism and the former Soviet Union. “What on earth do you mean?” the professor asked him. “Lenin wanted to destroy the state and that’s my goal too,” replied Bannon. “I want to bring everything crashing down and destroy all of today’s establishment.”
............
Two days after Lenin seized power in Russia almost exactly a century ago, he began an assault on the press – and his successors in the USSR did not let up for the next 70 years. In the few months between the overthrow of the tsar and Lenin taking power, a relatively free press had sprung up, almost all of it vigorously opposed to Lenin, who was written off as a dangerous demagogue. When his Bolshevik party mounted a successful coup and Lenin made himself, in effect, dictator of Russia, one of his first acts was to censor the press, which he called “a weapon no less dangerous than bombs or guns aimed at us … Why should we place it in our enemies’ hands?”

But maybe the underlying connection is simply your political opponents are the ENEMY and you use what ever means in your power to conquer them. And THAT is what the modern conservative movement is about. They are the virtuous and as many of those virtuous warriors love to quote..

Tolerance in the face of tyranny is no virtue. Extremism in the defense of liberty is no vice. And moderation in the pursuit of justice is no virtue..
.B Goldwater

Compassion and empathy are at best ill advised (even though well intentioned) but wrong and at worse a desire to pervert the soul through a culture of dependency. The fact that the rich no longer have to give money to the poor or helpless is a natural by product of their virtuous nature.

Lenin would very likely have identified 2017 as a revolutionary moment. He matters today not because of his flawed and bloody answers, but because he was asking questions similar to those we are asking today. In his quest for power, Lenin promised people anything and everything. He offered simple solutions to complex issues. He lied unashamedly. He justified himself on the basis that winning meant everything; the ends justified the means. Lenin was the godfather of post-truth politics. Powerful people have learned depressing lessons from him.

i can see why Bannon and Cato like him
Posted by ZeppoManx at 9:55 PM No comments:

https://www.politicalorphans.com/the-article-removed-from-forbes-why-white-evangelicalism-is-so-cruel/ I just wanted to bookmark this page for later consideration
Posted by ZeppoManx at 9:31 PM No comments: