Posted by ZeppoManx at 12:54 AM No comments: 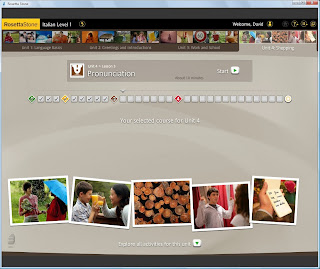 I missed class last night because I felt a head cold coming on and I felt bad enough this morning to stay home from work.

The upside is that I had some time while resting to play with the Italian Rosetta Stone.

The first Level has 4 sections and I am now almost half way through the 4th section, almost through the first Level! I guess my two semesters of Italian are coming back a little, as I fly through it pretty fast and now that I see the end of this level I am pushing a bit more.

It would be curious to know if there was any relationship or parallel between Rosetta Stone's Levels and traditional semesters of study. I don't know if it is easy because I am remembering what I learned a few years aga or if the Rosetta Stone method is just so dang good.
Posted by ZeppoManx at 11:48 PM No comments: 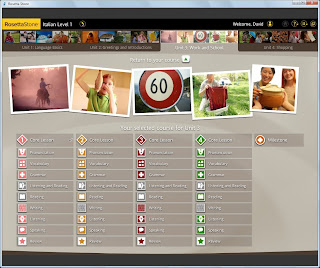 OK, through a fortunate accident (is that the same as serendipitous?) I found a benefactor so I now have the Rossetta Stone Italian Version 3 and I spent much of the last week attacking Level one.

4 or 5 years ago I took 2 semesters of Italian at the local community college and interestingly it was when the 3rd semester did not form because of lack of students I thought about filling my time with Aikido.

Anyway I have a very slight background although I have forgoten an amazing amount. So far it has been pretty easy but not “a Breeze” but I made it to the half way point of the first of 3 levels. The product seems a lot better than the Version 2 that I had with Spanish. Definitely a more professional product and laid out better. I read where someone thought there was less vocabulary but I can't really say anything about that.

I'll go with it for as long as I have the energy and see where I end up.

Of course learning Italian makes no sense because there is almost no chance I will get to Italy in the near or distant future and Spanish in Texas would be so much more practical...but that is pretty typical of me, in that I tend to do things that while interesting don't really seem practical. Well you gotta do something I guess.
Posted by ZeppoManx at 11:36 PM No comments:

Kagami Biraki for you
Kobayashi Maru* for me 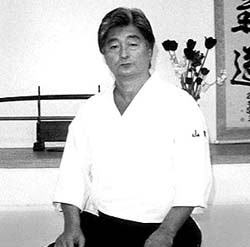 Yamada Sensei (Yoshimitsu Yamada, 8th Dan, Shihan) came to Aikdio of Dallas for the Kagami Biraki seminar. I made it Saturday (4 sessions/hours) and Sunday (2 session/hours) and after Saturday's class there were shodan and nidan tests.

The last seminar I went to was the same one in 2007 and it may be that I am three years older and *** pounds heavier but by the last class on Sunday I was wiped out. I made it through the last class (barely), and only after a nap and few glasses of wine do I feel my old self.

The Upside: Twice Yamada Sensei demonstrated a technique on me, nikkyo (GREAT!!) and something else that I was too worn out to remember (it was during the second session on Sunday). And once he watched me apply a technique and when he walked by he said "good". It was probably because he saw me do it horribly the first time and the second time I almost got it, at least I think he was talking about me. Anyway definitely highlights.

The Downside: Whatever I have learned over the past few years I forgot (EVERYTHING). I was a complete dunce with everybody I worked with. I don't know what happened but I was one stupid Aikdota It was a good experience but also humbling and a little depressing since I really felt how poor my aiki-mojo is. I think when you are working with people you know, are relaxed with and you all have the same teacher and are coming form the "same place", you end up helping each other a bit too much.

One strange thing was one time as I watched Yamada Sensei demonstrate something, I saw it, but between my failing hearing and his quiet English I didn't hear the name of the technique he was demonstrating. And I took each part I caught as something totally new. Which I suppose is good in that it should have made me fresh but I didn't recognize that it was tenchi nage. I was so focused on trying to remember what he showed, where the hands were and your body moved, that I missed the message I might have caught if I connected it to the tenchi nage I already knew.

The other odd part was Yamada's Shodan comments about the tests that he judged. Two guys from our dojo and four from other dojos tested for shodan ( black belt ) and the condensed message was “Four maybes, one fail, one just barely but I'm going to be a nice guy”. So I think everybody got their cool black coolats.

I may be prejudiced but I thought our guys did pretty well but those “others” were a bit weak. But to be positive, the lesson I take from it is that IF I ever get to that stage I hope I really have all the basics rock solid even when I am not expecting them. I think I saw one guy stuck trying to pull nikkyo out of a repeated shiho nage start, he just kept from making the wrong start and end up with shiho nage when he was supposed to finish with nikkyo. At least that is the way it looked.

I hope by the time I get there, if ever, I will be prepared. And the lesson from that is that I need to get started now. When I took my 3rd kyu test I managed to remember most of it for the test but if asked today I would be hard pressed to complete it now. So that bit plus how weak I was working with everybody this weekend makes it clear how much I need to practice.


* Kobayashi Maru : The test's name is occasionally used among Star Trek fans or those familiar with the series to describe a no-win scenario.
Posted by ZeppoManx at 10:28 PM 2 comments:

I'm torn about the video. It started because I was thrilled to see a coyote race across the road when I drove home after Aikido class on Monday. So I look to you tube for coyotes running across roads. And this is the one that captures the grace I saw on Monday. I mean look at the way the coyote leaps across the road and races across the field. I mean it is so damn cool! Way more cool than most human stuff an definitely cooler thant seeing a human run.

I am not a hunter. But I actually have more respect for hunters who shoot, field dress and eat the game they kill than the meat eaters that buy it at the store and would be nauseous if they had to cut up a dead cow. And I suppose there is an argument for thinning the coyote population but this video makes me sad. Ok, I've had a few glasses of wine and it is late but still...

I get the whole circle of like thing and even though I try to avoid the results of factory farming of meat I just have trouble accepting this type of death.

So look at the first part not the last. But I think it is pretty clear the video-grapher is pretty pleased with killing rather than respect for the grace of the coyote...again I get it, death is part of life. But still I feel more of a connection with the coyote than the hunter.
Posted by ZeppoManx at 11:14 PM 1 comment:

Don't Poke Your Eye Out!

Last Saturday we worked on the 14 (or 13 depending on who you talk to) Jo kata, which is the wooden staff movements. You learn each motion and while you don't worry some much in the beginning, at some point you learn that each motion is in response to a Jo attack.

Anyway, it was fun and the video is pretty similar to what we did.
Posted by ZeppoManx at 11:30 PM No comments: