Thoughts on Work and These Modern Times

Happened upon this today and wanted to make a note to myself...https://strikemag.org/bullshit-jobs/

This is the quote I want to remember...

It's even clearer in the US, where Republicans have had remarkable success mobilizing resentment against school teachers, or auto workers (and not, significantly, against the school administrators or auto industry managers who actually cause the problems) for their supposedly bloated wages and benefits. It's as if they are being told ‘but you get to teach children! Or make cars! You get to have real jobs! And on top of that you have the nerve to also expect middle-class pensions and health care?’

If someone had designed a work regime perfectly suited to maintaining the power of finance capital, it's hard to see how they could have done a better job. Real, productive workers are relentlessly squeezed and exploited. The remainder are divided between a terrorized stratum of the, universally reviled, unemployed and a larger stratum who are basically paid to do nothing, in positions designed to make them identify with the perspectives and sensibilities of the ruling class (managers, administrators, etc.)—and particularly its financial avatars—but, at the same time, foster a simmering resentment against anyone whose work has clear and undeniable social value. Clearly, the system was never consciously designed. It emerged from almost a century of trial and error. But it is the only explanation for why, despite our technological capacities, we are not all working 3–4 hour days.

The Golgafrinchan Ark Fleet Ship B was a way of removing the basically useless citizens from the planet of Golgafrincham. A variety of stories were formed about the doom of the planet, such as blowing up, crashing into the sun or being eaten by a mutant star goat. The ship was filled with all the middlemen of Golgafrincham, such as the telephone sanitisers, account executives, hairdressers, tired TV producers, insurance salesmen, personnel officers, security guards, public relations executives and management consultants.

And with modern age of financial management tools, nothing is actually made. This style of business men, CEOs and such, don't start businesses to produce stuff, the think of themselves as masters of the Universe and worth their millions. But the irony is the pizza dilivery guys bring more "value added" substance to his (or her) work than any of these jag offs.

Of course this implicates the broader question of work. Why is one job "worth" more than another? Why does Mitt Romney get to make millions from buying, stripping down a company, loading it up with debt, reselling it for more money(somehow..) and HE is the guy who gets paid millions while the home depot employee who loads lumber into a pickup and actually helps somebody get $10 an hour? And with deference to Douglass Adams, why dump on hairdressers and telephone sanitiser when they actually provide something. People with financial derivatives and other crazy money making schemes made of vapor live in luxury?

So who is "worth" more than another? What is worth? What is value? How is work and person-hood connected?

It also leads to the unstated premise that humankind is nothing more than a commodification of our souls. Why do we allow this to happen to us? It is crazy!
Posted by ZeppoManx at 2:37 PM No comments:

Are You Just a Calculator Attached to Appetites?
(..and is that a Clockwork Orange?) 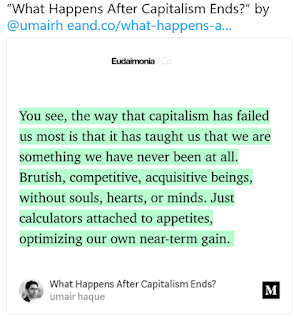 I found this quote on the twitter-sphere and think it hints at my core suspicion that “the world” doesn’t make sense. I read the full post and he goes off in his own direction and I can’t agree with his conclusions, but he does have two insightful quotes. I am sure a “conservative” would take issued with the “Brutish” and “without souls, hearts, or minds” parts, but capitalism as the invisible hand that works through individual interests to produce an efficient marketplace is bedrock thinking of the modern conservative movement for the past 40 years. And it hinges on the assumption that people by their choices will cause whatever market is most efficient to spring up to fill those needs. You know…Bullshit.

However the part about brutish is in sync if not espoused directly by today’s business world. In that it is the aggressive, hyper-competitive worker offered as the ideal for conservative thinking and business philosophy in general. But that too is bullshit. Hey, I’m the first to admit that people are jerks, but my supposition is that while cruel and aggressive self-interest is part of human nature, there is also a fundamental part that thrives on cooperation and kindness and it is the civilization we build around us that determine which force (among many others) will dominate our lives.

The second quote
The richest man in a society proclaims he has nothing left to buy — and so he’s going to shoot billionaires into space — while a third of its people can’t afford food, shelter and healthcare, life expectancy’s falling, the young, who have little future, are shooting themselves with guns or opioids, and retirement, a stable jobs, savings, an income, and a family are unaffordable luxuries.

This too explain displays how each billionaire is just a one or two decisions away from being a Bond villain. And that is because our cultural goal is to be rich, and therefore there is no reason to design a world where there is any limit on individual wealth, or to have any other goal beyond the no-liberal zeal of individual independence (which caries with it independence from working about anybody else). And once in place that wealth is theirs to do with as they wish. The goal is acquisition. I was going to say it is a goal not of what we as a people want but a goal of see who get the richest. BUT really it IS what we as a people want. We want billionaires to literally burn away millions of dollars on a vanity project involving blasting giant phallus symbols in the air. We want it because if we were rich too, we could also ignore the rest of the world and piss money down the drain, just because we wanted to.

SO…I will now cut and paste his quotes for my own mashup of my and this guy's thoughts...

Society has failed because it teaches us that we are something we have never been at all. Competitive, acquisitive beings who at the core are calculators attached to appetites, optimizing our own gain.

And the winners in this digital monopoly game, the richest men in a society show they truly have it all and there is nothing left to buy — for they shoot their money into space — while a third of the world struggles for food, shelter, healthcare, retirement, a stable savings, an income that pays for it all...all of which are rapidly becoming un-affordable luxuries.

That is the goal; that is what we are taught. Perhaps not taught explicitly but by consumer culture we are indoctrinated, and consumerism and conservatism crowd out charity, sharing and kindness since it goes against brand to not sell and buy.

Books on why humans are not logical consumer creatures

The Undoing Project: A Friendship That Changed Our Minds by Michael Lewis

The Tale of the Dueling Neurosurgeons: The History of the Human Brain as Revealed by True Stories of Trauma, Madness, and Recovery by Sam Kean

The Power of Habit: Why We Do What We Do in Life and Business by Charles Duhigg

Why we are NOT by nature competitive, aggressive assholes, but also why we sometimes are.

The Age of Empathy: Nature's Lessons for a Kinder Society by Frans de Waal

Posted by ZeppoManx at 12:46 PM No comments: