Is kindness always a result of an authentic spiritual life?

When you really stop believing your thoughts, you notice that you have more gratitude, appreciation, and love toward life. You realize that you can’t oppose your own life, so you feel this way even toward the people you thought were dificult because they’re part of your life, too. It’s not so much of a struggle — it’s more that we are open to reality.

Posted by ZeppoManx at 2:50 AM No comments:

Another Day of Reflection


Another birthday…thoughts of what? Renewal? Regret? Hope? Dismay? Confusion? Anticipation? Curiosity? --- ALL of that and more.

10 years ago I was just starting Aikido and managed to pass 5th Kyu by 50 and years later made it through 2nd Kyu before I played out. Although I saw the benefit of the testing structure to focus the practice, I was never worried about passing or failing other than the obvious fear of making a fool out of myself. So now that it has been a few years since I stopped practicing I don’t fret of not getting some rating…but I do see the loss of focus may have contributed to my current plump lethargy.

BUT, there is an arc to any art or skill or practice and it feels wrong to keep going if the emotional momentum is gone. Sort of like somebody who keeps going to church when they don’t “believe” any more, but they heard people who go to church live longer.

Or course I may yet return to Aikido, as a beginner again, if I can recapture that sense of wonderment when some technique takes you totally by surprise.

As for my other interests at the time, Spanish and Animation…I learned enough about animation that I know I don’t have the drive to make it work.

Spanish is the toughest one in that I’d still like to learn it but at this point all I’ve learned is that I need a traditional classroom setting. Online or Rosetta Stone just is not my style. For now the classroom route is just not practical.

So then, with my statistical prediction of 16 more years to live how do I feel.

Even though I am as confused as ever, I guess I am OK. Aside from the occasion mind-numbingly and overwhelming dark cloud of angst, ennui, or weltschmerz.

So except for all that I am cool. 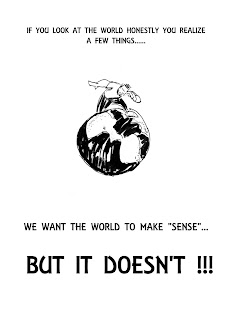 Posted by ZeppoManx at 2:51 PM No comments: