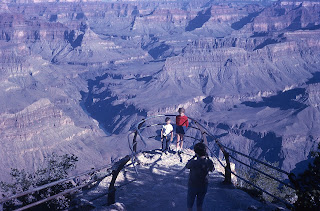 I have slowing been scanning the nearly 1000 35mm slides my father took throughout his slide taking career. And in one sense these from the 250 slide marker are less emotionally rewarding. The 1964 trip to California took us by the Grand Canyon there there are dozens of landscape pictures. But what is the most fun is pictures of people, maybe in funny costumes. But I am sure at the time my dad felt it important to take pictures of these majestic rock formations.

But I am struck by the the picture above. I think it is packed full of meaning, both personal and sociological.

I am certain my father did not appreciate the "meta" aspect of him capturing my mother taking this picture. But in a simpler consideration it is one of the few really natural pictures there is of our family. Even though my mother staged it, the fact that he is taking a picture of the setup is very cool.

You plop two baby boomer kids in front of sight with a geologic scale, and a picture of a picture by a couple who rode the post WWII economic wave yet both came from inauspicious economic upbringing.

That is the basis for mutli-genarational novel or the measuring stick of a mid century sociology text.


Posted by ZeppoManx at 8:59 PM No comments:

The Practice of Standards

I watched the pilot episode of Mr. Robot and really liked it. It scratches an entertainment itch that rarely gets attention.

So, I'm digging it but there is a part where Mr. Robot (Christian Slater) is talking to the main character Elliot about the nature of money and says

“Money hasn't been real since we got off the gold standard. It's become virtual.”

The point being modern business is built on something that is “UN-real”. And as much as I like the show, I'm calling bullshit on this point. Mainly because it buys into a knee jerk libertarian talking point. That money “meant something” when we were on the gold standard and now it is all messed up and any moment we will be using wheelbarrows of money to buy a loaf of bread.

Two things, the moment you start using paper money all of business is dealing with “virtual” money. It is just paper. Very nicely printed paper, but it is is virtual representation of something of value. It IS NOT REAL, and never was.

But more importantly, even if everyone walked around with gold coins in their pockets and we only bought and paid with gold, that too is not real.

WHY is gold considered, well, the gold standard? It is only because a bunch of people decided “Hey, we value gold and want some more”. Gold is just a metal that by itself does nothing. It is horrible for tools or weapons. And really for all the gold jewelery in the world, they are only worth something because a bunch of people decided it looked nice. But looking nice doesn't increase crop yield or bring rain when there is a drought, or stop rain when there are floods.

Gold is only of value because of desire. The desire for gold has caused oceans of blood to be spilled and killed millions of people. Continents were crossed and civilizations were destroyed just because people decided “I think gold is important”.

So back to using the gold standard, in 1860 why would a human being be accurately worth $800 or at the same time a months rent was $4? Or anything?  It is just because people decided on those numbers and used them. Supply and demand is just about desire, NOT about real value. Money is desire, and desire has no stable gold standard, desire always wants more. So even if we were on a gold standard or non-gold standard, it is all just a way for people to place a dollar amount on human emotions and desires.

The universe did not start like a board game where bits of gold were passed out to everybody and the rule book assigned them a value. So please, for the love of God, stop thinking of the gold standard as anything approaching a "real" and stable way to think about life.
Posted by ZeppoManx at 6:23 PM No comments: