I get no kick from Tae-kwon-Do, 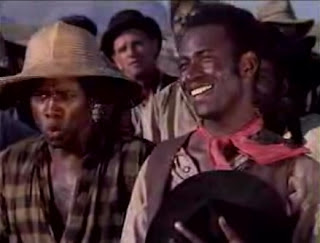 a mere kick or punch doesn't thrill me at all....

please imagine (or click on the picture) Clevon Little singing “I Get a Kick Out of You” in the opening scene of Blazing Saddles.

Our dojo is just any available area mat in a gymnastics center, and tonight the Taekwon-Do school moved into the building. They must pay a bunch of money because the gymnastics center gave them a room for an office and now EVERYBODY has to go through a previously hidden door to get to their practice mats.

But....I have to point out a few things. While we were waiting for an opening on the mat we watched a kids class of Taekwon-Do, and there was mess of them all punching like mad.

I can't help but be a little judgmental because when I saw the kicking techniques I couldn't help but notice the students after the kids class, their center was off and the emphasis was all on hitting the boxing mit.

Then there is the shout they apparently had to scream when they kicked. The problem is that is sounded like really weak sheep rather than powerful warriors. Check out this sound, this is what it sounded like.

Another thing I can't help but notice is that all of teachers looked to be in or just out of high school. So there was quite a contrast between Sidney and their teachers. But if it works for them I suppose I should be happy they found something they like. Another thing is I didn't see any old people like me.

Toward the end I really had trouble concentrating because they were “baaaing” so much. I suppose I'll get used to it.

Stuff like TKD is great for an area with lot of kids and parents who don't mind spending lots money on all sorts of classes. Its a great way for a TKD instructor to make a living or at least supplement their income. Not that I have anything against making money teaching an honest class. But it is different from something like Aikido of Plano, which is a non-profit organization. It is an honor to learn from someone as good as Sidney, who has a great career outside of Aikido. He certainly doesn't have to be there, but he is.

I'm also impressed that we do in fact have kids in our dojo. I think that most young kids don't have the patience for something like Aikido. And most north Dallas parents want to see fast results -- their kids kicking ass. "my 8 year old has a black belt, and he'll beat your kid's ass!". haha.

Sorry I missed practice on Monday. I was doing yard work. I have mucho trabajo to do, and unfortunately the evening are the only time I have to do it.

I really don't mean to dump on the TKD guys, but I agree that it is an honor to work with Sidney, which I suspect is something qualitatively different from the instructors I saw on Monday.