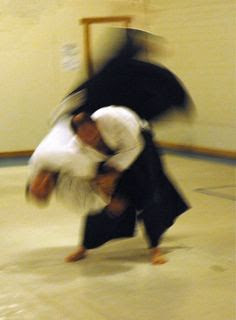 Today there were 2 first timers and 1 that has been practicing for only a few months, Alberto, Sidney, two much more advanced students...then me. So the most advanced work with the least advanced. This meant that I worked with the same partner for the whole class.

It was a little strange in that Alberto would demonstrate a technique and then show a simpler version for the majority of the class. Meaning I was put in the small more advanced group, of course the way more advanced people were helping out the beginners.

For a bit the two of us worked on a few koshi nage throws. And although in the past I've done reasonably well with my old nemesis Koshi Nage (well...sometimes maybe), but today was a total loss. I don't think I ever performed a passable throw. I took a bunch but I never turned the tables.

The thing about Koshi Nage is that you cannot fake it, Uke cannot just go along and make your job easy. If you don't find Uke's center you cannot do the move, unless you are have a really strong back you cannot flip someone over.

I'm not strong enough to throw someone over me, so it is all or nothing. In a way it is a great move to practice because if you get it right you really know you got it right.

I never got it right.

Failure is the key to success;
Each mistake teaches us something

At this rate I'll be a freakin' Super expert by the time I die.

Since there is no class Monday and I have to miss Wednesday I hope to use my time to write a decent posting about the founder of Aikido, Morihei Ueshiba (called O-Sensei). I only mention it because if anybody reads it I want them to recognize my obvious literary reference. It is really obvious if you've had to take American Lit or even watched the pretentious movie “Dead Poet's Society”.

The picture above shows how koshi nage should be done, not what I did.

While learning these throws in wrestling we used to break down the technique. Maybe next time, before practise we can work on dropping the hips to the right height. This used to help me alot because you don't need to worry about the set up, and you can repeatedly perform what I consider the most difficult part of most throws, hip placement.

P.S. Sometimes people are just too short to perform this move on. I always lose my balance when I lower my hips too low, then I am actually hanging onto Uke to keep from falling over.

That would be great. It's just so frustrating when you get the hang of it one time but seem to lose it all the next time you try.