Self Study = No Study

Last night I considered working on some Spanish. After all it has been almost a month since I last worked on it.

But then I ended up watching Allegro Non Troppo by Bruno Buzzetto
Check out some of his stuff HERE . Anyway, after that I spent an hour working on transferring an LP to CD (a project I thought I had finished last week, until I actually listened to the CD). So all that plus dinner and some light house cleaning meant I never got around to studying Spanish.

Unfortunately I’m afraid it shows a flaw in my character. It is pretty obvious I’m just lazy. Maybe for a lazy person the self paced study method isn’t really the best way to proceed. It is easy to go to Aikido class three times a week when I have no family or work obligations. And when I took Italian classes I didn’t miss any. But left on my own I have no will power over stuff cooler than the work it takes to learn another language.

But, I’m not giving up yet. Maybe I can show some strong moral fiber on Thursday and study up on the ol’ Spanish Rosetta Stone.

FYI, the LP I was working on was the double album of Woody Allen’s standup comedy routines from 1964 – 1968 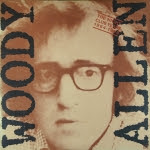 Posted by ZeppoManx at 1:57 PM