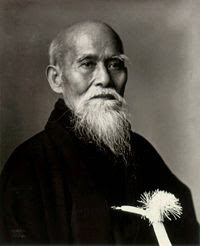 “There is no enemy for Ueshiba of Aikido. You are mistaken if you think that budo means to have opponents and enemies and to be strong and fell them. There are neither opponents nor enemies for true budo. True budo is to be one with the universe; that is to be united with the Center of the universe.”

Whereas the developers of modern Judo and Karate applied modern and logical teaching methods to pass on their martial art, O-sensei used elaborate Shinto mythology and ambiguous aphorisms when speaking about Aikido.

I have yet to hear anybody speak of Kami or suggest we have a Shinto purification ritual. And aside from references in biographies that come across as hagiography, and the occasional reference to “Ki”, you don't hear much more than the practical aspects of blending with the attacker's momentum.

I think that somehow, something of the founder's ways are still with us just from the feel of a traditional Aikdio class. I suppose one remnant of O-sensei's inspiration is that although there is a set list of techniques to learn as you take Aikido tests, I don't think there is a uniform method of teaching, and every teacher emphasizes what the like. So, in a way it is amazing there is as much uniformity of results in different dojos.

O-Sensei was a follower of Oomoto-kyo of which I gather is an offshoot of Shinto, and has been led by charismatic leaders, and they all thought they would change the world. It sounds like Oomoto-kyo was the Shinto equivalent of a 18th century American Utopian / revivalist movement. They were divinely inspired, genuine and thought they could change the world through love.

O-Sensei really felt Aikdo could transform the world, and he repeatedly states Aikdio is a manifestation of Love. Oh What Paradise It Seems!

For now I'll just try to do a decent Koshi-nage.

"The Art of Peace does not rely on weapons or brute force to succeed; instead we put ourselves in tune with the universe, maintain peace in our own realms, nurture life, and prevent death and destruction. The true meaning of the term samurai is one who serves and adheres to the power of love."

O CAPTAIN! my Captain! our fearful trip is done;
The ship has weather’d every rack, the prize we sought is won;
The port is near, the bells I hear, the people all exulting,
While follow eyes the steady keel, the vessel grim and daring:
But O heart! heart! heart!
O the bleeding drops of red,
Where on the deck my Captain lies,
Fallen cold and dead.