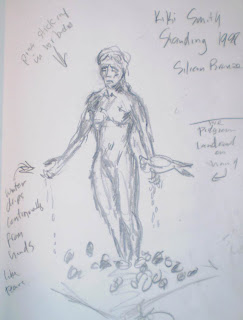 I’m in Phoenix tonight and while there was no Aikido available I spent a few hours at the Phoenix Art Museum today when I had a few hours to spare between work tasks.

It’s a nice museum with a nice range of genres and artists.

The first sketch is from a bronze sculpture by Kiki Smith from 1998. From a quick web search I gather there are a number of these around and that they represent the world of feminist suffering.

The statue is a fountain and the water drips from the hands, but it so reminiscent of tears it I naturally assume it meant she was crying. Whatever the artist’s motivations it was amazing. I spent a long time trying to capture the angles but the above is all I came away with.( a pretty poor result)

While Kiki may have wanted to make a feminist stament what really struck me was the pigeon that landed on the hand. It seemed to indicat the world is not really so sad. 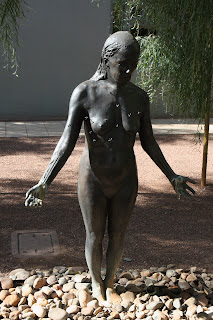 Then I went into the exhibit “You who are getting obliterated in the dancing Swarm of Fireflies” by Yayoi Kusama. You walk into an completely dark room alone and there are thousands of Christmas lights on black wires in a smallish room walled with mirrors. Immediately you are disoriented and the impulse is to turn around and go back to the entrance. As you step into the room the lights somehow change intensity and color as you walk around. 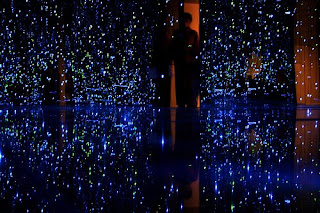 I later read she meant it to show her loneliness but at least for my first time it really lifted my spirits.