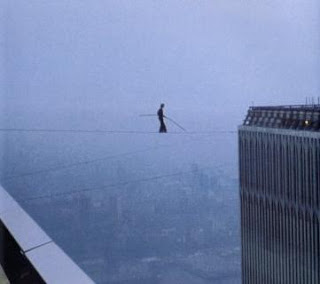 ...A look at tightrope walker Philippe Petit's daring, but illegal, high-wire routine performed between New York City's World Trade Center's twin towers in 1974, what some consider, "the artistic crime of the century”

It is pretty amazing and the video of Philippe walking and laying down on a wire across the WTC towers brings you to tears. Of beauty? Of magic? Of what?

But it really is stunning.

I saw it on the anniversary of 9-11 so it had some extra poignancy which might have been interesting to address in the movie (it was not).

Probably improperly I have sympathy for this guy, in that he does things that have no objective value. Of course my value-less hobbies are not nearly so stunning.

Great film. Saw it a couple of weeks ago.