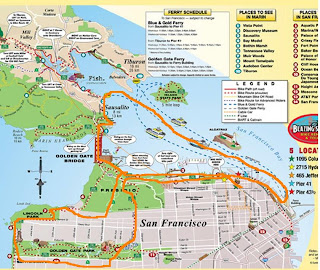 After Arizona I went to the San Francisco Bay Area.

Along the way I stopped for a couple of slices of pizza and a couple of glasses of wine. After lunch I went to a bookstore next to the pizza place where I was scolded for writing down the titles off books since the owner didn’t want to have her store used as a display case and the people buy them elsewhere. She was really pissed about it. I ended up buying the book I had planed to but I thought about stalking out in a huff, but I did not.

After that I rode through Golden Gate Park which was nice but somehow I took a wrong turn ended up bypassing most of the park and ended up at the far west end of San Francisco .

I managed to get back to the rental place around 3:30 PM after a lot of huffing and puffing up some steep San Francisco hills.

So it was a great day with a lot of Bicycling.

Oh yeah, I went to Seattle Aikikai last night. I practiced and looked like a total wimp, but it was good.

The picture shows my route in orange.