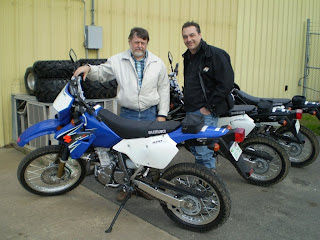 Thanks to a very friendly loan I was able to buy a Suzuki DRZ400S Dual Sport Motorcycle. I suppose it might be considered similar to the middle aged man getting a Corvette, something that denotes youth but is actually a hollow attempt to recapture a lost age.

Yeah, I suppose...but, DAMN motorcycles are cool!!! And the DRZ400S strikes at my soul with it's coolness even though I now owe a good friend a ton of money. Anyway my high school chum and his friend from work met in Bartlesville, Oklahoma to by 4 motorcycles (mine, theirs and another sucker they talked into this project) from the same shop we bought our high school Suzukis from.

Then we rode a very short portion of the TransAmerican Motorcycle Trail, before I pealed off to ride the bike back to Dallas (over 300 miles according to Google maps). It was a heck of a windy day but I made it safely back a and felt great. DAMN motorcycles are cool!!!

The picture shows me and an old College roommate with our new motorcycles.

Am I a cliché? Perhaps, but there are reasons clichés are..well, clichés. BECAUSE they point to a truth. If you don't want to be old...act young. Not childish, but young. But for me riding a motorcycle doesn't make me feel young, rather it transcends age (to be a bit pretentious) in that riding a motorcycle forces you to live in the moment. Not young, not old,.. just there!

I think this means I will rework the subtitle to the blog to include motorcycles now.