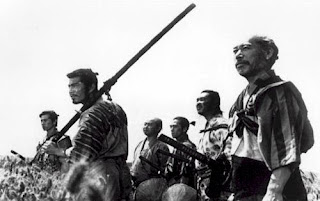 Tonight Sidney Sensei was elegant as ever.

More Katatetori, which we worked on last Saturday was the topic tonight but Sidney has a way of showing you the gracefulness of a technique that, for me, speaks to the heart of why I practice Aikido.

What stuck tonight was that Sidney repeatedly said “It's just like in Ikkyo” when the technique itself was ostensively nothing like Ikkyo yet upon elaboration the truth of the observation was clear. I've heard the multitude of attack-technique variations said to be thousand and conversely the approaches to Aikido as few in essence. So tonight I weigh these two aspects, everything is either an explosion of possibility or merely one of a few inevitabilities.

The picture is from The Seven Samurai and I only use it because I was watching it earlier and I like it.

I've been re-watching Seven Samurai a lot lately. What a beautiful movie!

If you watch the Herny Kono video he talks alot about how all of these techniques are the same. The set up is identical for most resposes, but the positioning of Uke allows for other responses after the original attack has been dealt with.
Ikkyo is the base technique for almost any midline attack to the upper body. I think the only exceptions to this rule are the kote gaeshi, kiaten nage techniques that use tenkan instead of tenshin/irimi step to move off of the line.
An article that I read said (paraphrased) that in ikkyo we use the elbow for control, in nikkyo we use the wrist because Uke has turned to face us after the initial ikkyo break down, sankyo uses the wrist but it is used if Uke tries to turn away from us after the ikkyo breakdown, and yonkyo is used if Uke tries to catch his balance with the arm that nage uses for the ikkyo breakdown.
So once the ikkyo breakdown has occurred, Uke cannot turn into nage, away from nage, or brace himself with the controling arm.
Another article explained that since we should keep uke's balance down during the breakdown, Uke should not be able to use his legs or knees to try to trip or harm nage.
Sidney, really impresses me with how he tried to teach us the ideas behind the techniques. He seems to really understand aikido at an imporvisational level. This is the way that i would like to learn aikido. I know that learning the "scripts" (katas) in aikido are important, but we seem to never get a chance at our dojo for free mat time so we can try to improvise.

P.S. If you are intrested in more free mat time, and Bob or anyone else, I would love to petition for Mark and Sidney to get us some mat time so we can just play with aikido.

I'd be for some free mat time, but I fear the best times would be when the place is already occupied with others. But if it worked out between family obligations and space availability I would love to get in on some of that action.

I should just end up with just enough hours to be eligible for the 4th Kyu test at the end of August. So any extra practice time to prepare would be nice. Assuming I get Sidney's OK.

How would you describe the 2 ways?

The real different for my test was the way that you break the grip in the beginning.
Katatetori Kotegaishi
---------------------
1st - Breaking the grip by placing uncontrolled hand over controlled wrist and tankan step
(think about Uke is pushing hand down)

Hope this helps. I know it is difficult to see the moves in words, but we can run through it next practise.

-----------------------------------
Also, I agree about the dojo being full, but maybe Mark can work something out with the gym. I just don't want to ask him for more mat time if I am the only one who would use it. If a hand full of people were interested maybe it would be worth the effort. Check out an Aikiweb forum I posted and you will see that most dojos use open mat time on a weekly basis.

I'd love some free mat time. At this point, I'm so new I don't know how much I'd gain -- I kind of like the predictability right now. But I'm up for it.

Today I worked with the new guy, Phil, the whole time. It was pretty good. We worked on a lot of kotegaeshi and tenchnage -- both things on the 5th kyu test.

That is a pretty great analysis of the techniques. You should put together some sort of "Exam Cram" for the Aikido tests.

I would be happy to make some sort of analysis if you think it would help.
I think the problem with learning aikido is becasue we don't put emphasis on Uke's intent during a technique. I have had to rely on Nage to try to see how Uke is causing Nage to move in his particular manner. (Learned this from the Kono video.)
I think that if Uke doen't give the right intent to his motion, the techniques get confusing and awkward, often unworkable.
Plus, most of the techniques in aikido rely on Uke telling us where his ballance and intent is through our connection to him. IMO This is why "nikkyo is just like ikkyo". In both cases Uke has given the same initial intent and then adjusted after being broken down by the ikkyo technique.

Kono and Saotome always talk about how O'sensei spoke more about the philosophy of aikido that the techniques. Although I don't understand Yin and Yang, I think that our techniques were discovered as a physical manifestation of this principle.

Yet another dissertation, sorry man but I can't help but to teach or at least theorize when asked a question. I don't mean to over occupy your blog.
{;>)}]

I agree, Brian. It is critical that Uke give proper intenet - an authentic (if perhaps half speed) attack -- in order to understand a technique.

Since so many of these techniques, ideally, rely on using the Uke's motion against him -- not fight him but going with his motion -- its important that when we are Uke we understand exactly what we should be doing. Sometimes I feel like as Uke I'm not active enough - I should be pushing or pulling, etc -- to give Nage the proper thing to work with.

Of course, as a new practioner, it is hard to think about this when I'm still very concerned with falling well, so as not to get injured.