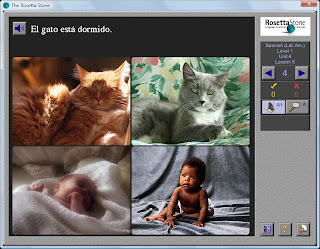 It took a while but I finally busted out the Rosetta Stone for some Español action. For the record tonight I finished Level 1: Unit 4: Lesson 5. I think the previous lesson was a bit boring because it was really hard to motivate myself into study mode. Especially when there is animation and video editing on the same notebook computer all just a few clicks away.

This lesson raised the bar somewhat, in that they slipped in the past participle as in “El gato está dormido” after "El gato está durmiendo".

I'm still pleased with “The Stone” but there are some drawbacks such as no explanation of the two types of sleep (-ido versus -iendo). The present progressive is easily translatable as “The cat is sleeping”, but what is “The cat is slept”?

Then there is the problem stepping onto la escalera, las escleras or los escalones. I think they are respectively, the ladder, stairs, steps. You are left to figure these things out just by choosing until you get the correct answer. But maybe that is their point, you learn by failure more than by traditional study.

Now that I've slept on it, maybe this is a lesson that sometimes the problem is with English. We say "He is sitting" and "He is seated". So why don't we say "He is slept"?

English, what a wacky language.