With Aikido you get more Bubbles! 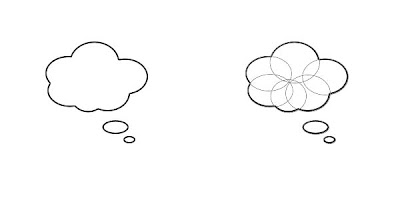 One thing we worked on tonight was two responses to shomen-uchi (overhead strike to the head). The first was just getting off line and the obvious next step is kote gaishi which is what we went on to do. BUT after that Sensei had us work on if uke had some more force and you couldn't apply the technique. Then Nage was supposed to go with it and turn it into Kaiten Nage.

In the “teisho” after class he used the example of an apple to say that the same thing means something different depending on your view. To a hungry man the apple is food but to an artist (I guess the artist had already eaten) it was shape, shades and colors. And Aikido really means you look at any situation as something with many different alternatives so you are not locked into any technique. Aikido is about "Options"

He went on to say something like with aikido two different people can look at the same thing and think completely different things and what he saw might not be what you saw. And at some point he declared something like “Aikido gives you more bubbles”.

He talked about a cartoon where two people are seeing the same thing but you can tell visually that they are thinking in completely different ways. In the business they call them thought balloons, but there is something so charming about calling them Bubbles. Like a refreshing sparking glass of champagne


A teisho is a formal presentation of dharma by a Zen master, usually during a sesshin. A teisho may appear to be a lecture, but the master is not trying to convey concepts or knowledge. Instead, through the teisho the master presents his or her realization.