How to Get Too Many Books For Your Bookshelf 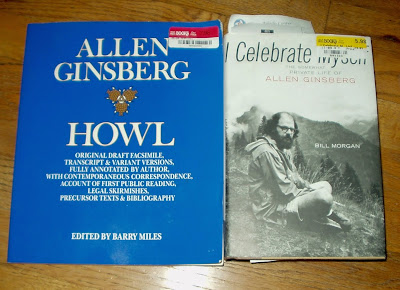 Last night I watched HOWL with James Franco as Allen Ginsberg. It may have been the mood I was in or maybe the wine, but I though it was great. While I know a little about that era (OK, I've really only read On The Road by Jack Kerouac) I have never paid much attention to Ginsberg or his famous poem other than recognizing it when parodied by Lisa Simpson.

But after Aikido I stopped by Half Price Books in Richardson (TX) and found a book with a facimile of the original poem that was depicted in the movie I saw. It is really cool and has tons of notes. AND I found what looks to be a good (and long) biography of Ginsberg.

My point is that it the movie gave the feel of what they might have been striving for at at that time. An earnestness, a truthfulness that is usually avoided or denied. Or maybe they were trying so hard to articulate this "truth" because there were not really sure that it was really there at all. Or not, or something completely different. Different but still....

I saw the best minds of my generation destroyed by madness, starving hysterical naked,

dragging themselves through the negro streets at dawn looking for an angry fix,

angelheaded hipsters burning for the ancient heavenly connection to the starry dynamo in the machinery of night,

who poverty and tatters and hollow-eyed and high sat up smoking in the supernatural darkness of cold-water flats floating across the tops of cities contemplating jazz,

who bared their brains to Heaven under the El and saw Mohammedan angels staggering on tenement roofs illuminated,

who passed through universities with radiant eyes hallucinating Arkansas and Blake-light tragedy among the scholars of war,

who were expelled from the academies for crazy & publishing obscene odes on the windows of the skull,

who cowered in unshaven rooms in underwear, burning their money in wastebaskets and listening to the Terror through the wall,

who got busted in their pubic beards returning through Laredo with a belt of marijuana for New York,

who ate fire in paint hotels or drank turpentine in Paradise Alley, death, or purgatoried their torsos night after night...... 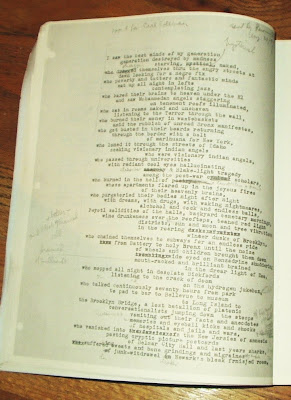