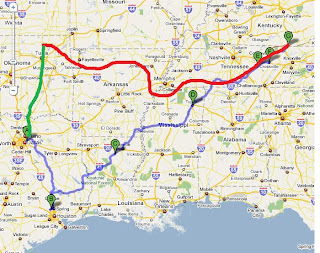 OK, here's the plan. I ride to Houston, then to Tennessee then to Oklahoma, then back to Dallas. I “plan” to camp as much as possible. For the adventure and for the economy.

On a Friday in May I head to Houston where I spend the weekend visiting relatives.

Then on Friday I met two friends and ride the TransAmerica Trail(http://www.transamtrail.com/) to Oklahoma taking 7 days, arriving the following Thursday and I ride back to Dallas on Friday.

I've discovered I can update a blog with pictures taken from my blackberry, so I think I'll start a separate blog just for this trip and update it with more pictures and comments after it is all over.

Posted by ZeppoManx at 9:38 PM