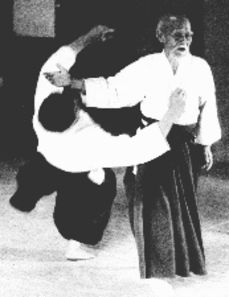 I got an email from a fellow Plano Aikdo Center practitioner where he talked about one of our fellow students, Lawrence, who practiced in Shanghai and Tokyo over ten years ago and only recently started up again. The email related how he gently demonstrated to a more aggressive partner (uke) that his (nage) gentleness didn't mean a weak technique

Anyway, I replied with a story from the Saturday before last where we had practiced Irimi-nage but I didn't get to practice with real experienced people.

So after class I asked Lawrence to really bring me down as uke since I wanted to practice my ukemi where I tried to flow around nage as he performed the technique. I MEANT the part where nage steps behind and then tenkans and brings you and your shoulder around and down and afterwards you as uke try to recover after which nage steps through and performs the actual throw.

Well Lawrence thought I meant the last part where the actual throw happens and he THREW ME DOWN!!! I mean I hit the ground the hardest I can remember. It was freakin' amazing, I was literally floored and I barely had a chance to experience it, and Lawrence thought he was doing what I asked for.

The picture shows the founder of Aikido as if he is simply walking by and almost incidentally throwing somebody. It reminds me of Lawrence.

I hope to post about feeling sick and practicing soon

Posted by ZeppoManx at 8:48 PM