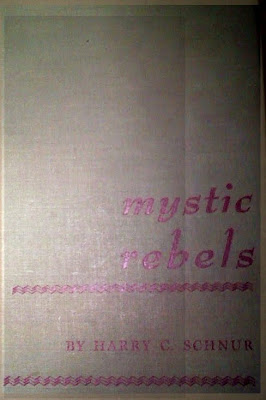 
Mystic Rebels - copyright 1949.
The story of 4 “mystics” of which probably only one was close to a stable person.

I wonder why he put Apollonius in this study since everybody else seems to have pushed themselves to to their emotional edges. But Apollonius was steady, diligent and very structured and seemed to always look for some greater truth. The others discovered some insights and let their passions overwhelm them . That description is a little superficial but more or less addresses the point.

Jan Van Leyden and Sabbatai Zevi show us what can happen when people with religious faith of a conventional level allow the promise of divine fulfillment overcomes mundane acceptance of an imperfect world. In these two two cases it doesn't end well. Basically they become mad with power and disassoiate themselves from reality.

Cagliostro is anticlimactic in that he is presented as starting and ending as a con man with the notion that he felt he discovered something helpful to mankind in the journey. Unfortunately the still lingering inquisition of the day found him more threatening than charming and he died in a church prison surviving for years in the most retched conditions. In case you didn't' know, he was convicted of Freemasonry (much like our founding fathers)

I bought this used book almost 10 years ago, knowing nothing about the author or the subjects. (other than Greil Marcus's comparison of John Lydon aka Johnny Rotten to his namesake and  leader of the mass Anabaptist in Leiden.

What do I take from the book? Well, history is really, rally strange and if you think people are crazy now...they were just as crazy in the past. I probably should have learned more, but that is all I can articulate now.

Posted by ZeppoManx at 9:06 PM

Dave, glad to see you are still blogging and alive and well. Give me a call sometime. David