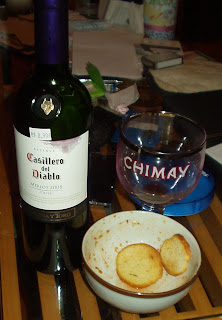 so much depends
upon
a red wheel
barrow

glazed with rain
water
beside the white
chickens.

William Carlos Williams Tonight's Aikido had a clear message. Unfortunately the receiver (me) was not so great.

How can so much be so obvious and simultaneously unclear?

The focal point for me came early when Sensei was trying to get us to respond to a failed defense by letting go of our original intention and falling but at the last “split of second” turning the “letting go” into advantage Nage.

For those interested, it was a shomenuchi strike to the head where you tried to used ikkyo (first technique) but uke (the attacker) regained control and stood up driving Nage (the victim) up and starts to continue the arc and drive nage down to the qround. At which point Nage "goes with it" but twists around and guides all this energy in motion to a different direction.

After class I asked for the name of what we did, and that may have been the clue to my mistaken question. There was not a clear cut name, or if there was it was simply a collection of Japanese phrases to describe it. I was wanting to clarify, classify, codify...and Sensei was wanting us to “feel” what was happening.

It refers a bit to my last post. I was looking for instruction on what I needed to do to recreate what we did, but sensei was trying to get us to “relax” and feel the moment (my interpretation not his). I was looking for ways to control the situation and Sensei was trying to teach us that control was the wrong approach. I guess your could say nage ( the “victim”) in the end “won” but winning was not the lesson.

Intellectually I can spot the inspiration or essence of he message. It happened when sensei, who is always calm, slightly raised his voice addressing each group and said

The point being we were all focusing was the mechanics of what we just observed but the demonstration was about letting the technique do itself.

How to get to that point was a whole 'nother thing.

I don't know why I thought of the William Carlos Williams poem except that I've always liked it because in most ways it makes no sense, but somehow it seems relevant to almost every part of life. And in this blog post it emotionally applies...but I just can't explain why.

Or maybe...so much depends on things that you can't control...or not.

Then again it may be the photo explains the whole post. After class I ate some food and drank a bottle of wine from a beer glass and and magically my world and experiences seemed like poetry.

So much depends upon a red wheel barrow...and a bottle of red wine.

We seem to be posting similar pictures these days.

That technique - the response to a failed Ikkyo -- always makes my big toes hurt. That is all.