I happened across this when Goggling Behavioral Economics, and I didn't want to forget it.


What are some examples of the real-world use of behavioral economics?

The study shows that the purchase quantity limit affected the number of soup cans the customer purchased.
https://www.quora.com/What-are-some-examples-of-the-real-world-use-of-behavioral-economics


Posted by ZeppoManx at 4:46 PM No comments:

Kafka; The Brother I Never Knew

Strangely I have never been able to get "into" Kafka. But this quote attracts me in an uncomfortable way. 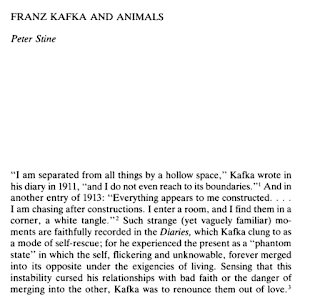 Posted by ZeppoManx at 4:46 PM No comments:


For quite a few years Ive been using Magix Movie Edit MX which I think is now call ...Pro. Anyway, when I first starting my amateur video making  10 years yeas ago I was fortunately gifted a fully functioning Adobe premiere package from a software salesment. But when I switched to HD the version was too primitive to handle it.

I probably could have found a cracked newer version of Premier but ended up purchasing a Magix Movie Edit MX from Amazon. For my purposes it is as good if not better than the Adobe thing.

Anyway, I don't use it all that often so this it to remind myself how to do a few tasks. Rather than pay a ton of money to have my in-laws box of 8mm films transferred to digital I found if you have a variable speed 8mm/Super8 projector you can speed it up enough so the flicker disappears whne you simply record to a digital camera recording the projections.

The upshot is you can't get a perfect screen projection ration to recording area AND the motion is too fast.

Here is what you have to do to remedy that.


To change frame to compensate for recording from projection on wall.

effects
video object effects
Motion effects
Speed
Factor
move slider to left to slow down speed to it roughtly matches orginal
factor of .84  so...
Posted by ZeppoManx at 11:34 AM 1 comment:

Ode to Trumpland, the land where I reside...

Turning and turning in the widening gyre
The falcon cannot hear the falconer;
Things fall apart; the centre cannot hold;
Mere anarchy is loosed upon the world,
The blood-dimmed tide is loosed, and everywhere
The ceremony of innocence is drowned;
The best lack all conviction, while the worst
Are full of passionate intensity.

Surely some revelation is at hand;
Surely the Second Coming is at hand.
The Second Coming! Hardly are those words out
Troubles my sight: a waste of desert sand;
A shape with lion body and the head of a man,
A gaze blank and pitiless as the sun,
Is moving its slow thighs, while all about it
Wind shadows of the indignant desert birds.

The darkness drops again but now I know
That twenty centuries of stony sleep
Were vexed to nightmare by a rocking cradle,
And what rough beast, its hour come round at last,
Slouches towards Bethlehem to be born?

This part intrigues me...

The ceremony of innocence is drowned;
The best lack all conviction, while the worst
Are full of passionate intensity.
Posted by ZeppoManx at 9:49 AM No comments: