What if Algernon Practiced Aikido?

In 8th Grade everybody had to read the novel Flowers for Algernon where a new medical procedure dramatically increases the intelligence of a lab rat as it does Charlie, the slow witted Human subject. The now clever Charlie starts monitoring Algernon recording his development.

But the crux of the story is when Charlie realizes that Algernon is slowly losing his intelligence and also realizes his own abilities are fading also. I still remember being quite moved as Charlie identifies his failings with Algernon's.

So what does this have to do with Aikido?

Well tonight I felt like I was a mix of Charlie and Algernon in my Aikido practice.

I've missed a fair number classes the past few months so I probably shouldn't be surprised, but tonight I was trying to do shiho nage and I kept saying to myself

“You are doing this worse than you ever have” and “You are even more tense and stiff than your first day”. All in all I felt like everything I had learned over the years was slipping away

So my intellectual analysis was Charlie and my diminishing Aikido skills was Algernon. Hmmm, that doesn't fit perfectly but make it work somehow. I guess it is not just Aikido that is slipping away. Anyway, I found my own story quite as moving as when I read Flowers for Algernon.

The Adventures of Huckleberry Finn by Mark Twain
My rating: 4 of 5 stars

Hey, what a nice book, but it really is kind of odd.

I wonder what the general feeling about Huckleberry Finn these days? You hear about it being banned in schools and I always assume it is because of the “N” word which you figure is because of political correctness or politeness. But I'd think it would really offend a more conservative or traditional mind since questioning authority seems to be the whole point.

And you know, that Tom Sawyer guy is kind of a jerk.

View all my reviews
Posted by ZeppoManx at 10:02 PM No comments: 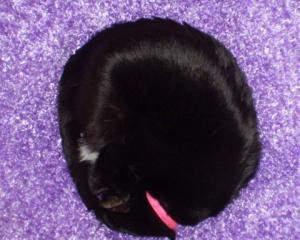 I promise I will not turn this into a blog about my cats. But I like this pic.
Posted by ZeppoManx at 4:09 PM 1 comment:

Two Cats In a Pod 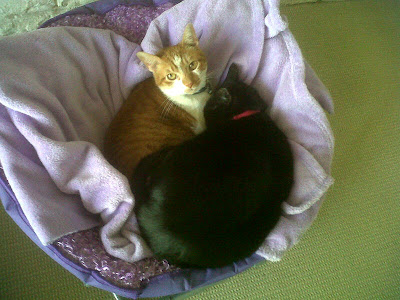