Super 8. I just watched it and this movie bothers me. ...Super 8...It means something...almost like saying 8mm.

JJ Abrams and Steven Spielberg, who both claim to love their roots in 8mm amateur film making decided to crap all over that tradition.

First off, the only reason you use Super 8 is because you are taking your Dad's camera and doing whatever you can to make something like the “real” movies you love. You have no money, no skills, only desire. What does “Super 8” do? It starts off presenting the energy of teenagers wanting to make movies* then takes all that enthusiasm and spends a bunch of money making a multi million dollar blockbuster.

They COULD have stayed true to the super 8 ethos while making a modern movie but no, they had to pull out the checkbook and buy a whole bunch of special effects. Of course the irritating part is that it starts off pretty good but then suddenly you are in Spielberg's “War or the Worlds”

With all humility and acknowledgment that my (our) Super 8 is crude, but THAT is what Super 8 is all about.


*I REALLY had trouble getting past the part about these kids having a sound Super 8 camera, and then after the one was broken another kid's dad had a sound camera. NOBODY had sound Super 8 cameras, that was something you dreamed about. Plus you would need a really expensive editor to make something with it. Realistically, any Super 8 meant silent. I was willing to let it go that one family might have one, but two families? Now Way!

Keynes Hayek: The Clash that Defined Modern Economics by Nicholas Wapshott
My rating: 3 of 5 stars

Very readable introduction to Keynes and Hayek. I think it is actually more a book of the effects of the two than even an economics 101 view on their actual thoughts. so I m sure that economic geeks bemoan the simplifications of both economist. You get enough to get a feel of the economics and I'm cool with that especially since I think I end up with more knowledge of what is involved than most people who thow their names around.

My condensation of this condensed fare is that there is more to Keynes's economics than portrayed by conservatives and while Hayeks Road to Serfdom may fit in nicely with Glenn Beck's paranoid world view, Hayek was not really at ease with what grew into the conservative movement, although he definitely wanted to privatize most every public service. Strangely the only exception was public health care which is the one area I wish the author would have explained a bit more.

The last few chapters seem a little episodic with tidbits about Kennedy acting as a supply sider and aside from his conservative talk Reagen is revealed to be quite a Keynesian when you factor in the huge unfunded defense spending spree.

All in all Keynes comes across as more complex and apparently he was often drasticly refining and redefining his ideas, while Hayek was pretty well set in his views from the start. Of course as he aged he became more intense with things like when he laments the tyranny of the majority and states the the free market is the only true participatory democracy. Also I think the modern libertarian/conservative movement has adopted Hayeks suggestion below.

“The main lesson which the true liberal (libertarian) must learn from the success of the socialist is that it was their courage to be Utopian which gained them the support of the intellectuals and thereby an influence on public opinion” --- “...(of his views) you can say it almost a religious belief ...that the market is almost God ordained”.

This explains why it is so hard to discuss economics with some conservatives, if you ask them to question some of their premises they feel you are attacking their religion. View all my reviews
Posted by ZeppoManx at 6:56 PM 2 comments:

manifest one true nature when you see a stone; or 無 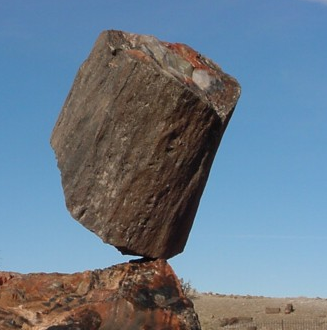 On my way to Aikido class last night I happened to be listening to a podcast from Living Zen where the teacher was talking about Case 1 form the Mumonkon. The Koan MU.

Here are a few excerpts from Living Zen-podcast Zen talks but Eshu Martin, abbot of the Victoria Zen Center in Victoria, BC Canada

Whenever we throw up a barrier that makes it "me" and "that", "inside" and "outside", "me" and "them", whenever we have solidified something and said this is what I like, what I am, the practice of mu is to burn it. Open your hand and just let that solid object flow.

Maintaining the presence of this case (mu) is a really difficult thing. But it requires we take this practice out of the Zendo into our day to day lives. Into the way we are eating breakfast the way we are doing our work. Really developing the awareness of when we grab on , when we throw up the barrier whenever we polarize, objectify, make solid anything. This is where we have to do this practice of “mu”, where we pull down the wall, open our hand, allow that solid object to flow. We step forward into the difficult situation we want to be a part of

What struck me was the part where we “step forward into the difficult situation we want to be part of” which so reminded me of Irimi Nage or Entering Throw. All the Aikido techniques are hard for me but Irimi seems particularly elusive. I heard one explanation that said something like you enter uke's attack and turn an blend into it, almost in a loving embrace

The podcast also re framed the famous koan MU to say

how do you manifest one true nature when you see a stone?

How do we acknowledge on an experiential level how do we affirm oneness?

It reminded of Sensei talking about how Aikido is a reactive art, we shouldn't meet force with force, although ironically last night he told us to be the dominant part of the technique, not forceful but somehow dominant. Oh well, go figure. 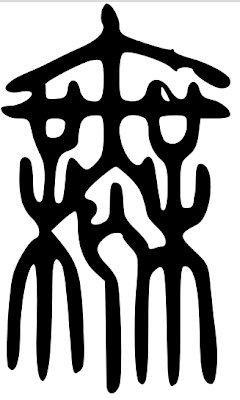 The character 無 in seal script
Posted by ZeppoManx at 9:19 PM 3 comments:

Man's Search for Meaning by Viktor Emil Frankl
My rating: 4 of 5 stars

I first read this almost 30 years ago and I remember being impressed at the time. This time it was still engaging and the camp stories are amazing and the second half with the description of logotheraphy was interesting and bears consideration, but after all that I am not sure how he expects everybody to realize their self transcendence.

1.creating a work or doing a deed
2.by experiencing something or encountering someone
3.by the attitude we take toward unavoidable suffering

And from that, meaning naturally comes, not as the goal but as a byproduct. OK, sure, but there still seems to be something missing. Of course this was just an introduction but some of the examples seemed to just be finding clever mind tricks to accept the current situation as meaningful.

Maybe this quote hos the key, but I can't seems to figure out what it means.

"What is demanded of man is not to endure the meaninglessness of life, but rather to bear his incapacity to grasp its unconditional meaningfulness in rational terms, logos is deeper than logic".

View all my reviews
Posted by ZeppoManx at 6:34 AM No comments: