The Contract with God Trilogy: Life on Dropsie Avenue by Will Eisner


I finally got around to reading Contract With God and the rest of the trilogy. Often named as a milestone in the development of the graphic novel, I found the title book to be the weakest. Contract With God seems to me a little forced. Would anybody really think a contract you write yourself would get a binding result from God. Eisner full all of the books with Jewish flavor which I probably shouldn't comment on. BUT, I kind of thought Jewish history was filled with God's people having unfair experiences in their lives. Why should this one guy feel he is different? And the other stories in the first book also seemed a little too simplistic.

The other two books A Life Force and Dropsie Avenue are less stilted and overall they are more complex. The stories and the characters have much more depth.

The graphic part of the book is...well, maybe it is perfect. Not that the drawings are anatomically perfect (although I can't say) but the cinematography, or whatever you call it in graphic novels, is conventional where it needs to be, and inventive is the same sense. But it never takes away from the story, which the the “perfect” part I was talking about.

I've always had a “problem” with Eisner's drawing. It looks so relaxed, as if he just dashed it off, much like the scene in Amadeus where Salieri realizes Mozart never has to rewrite the music he puts to paper. Perhaps Eisner slaved meticulously over each frame, but it always looks so fluid it burns me up that anybody can pull it off.

The only thing that distracted me in Neighborhood, The: Dropsie Avenue is that in the entire history of the neighborhood there is no example of gentrification as we think of it now. But still a very nice work.

Posted by ZeppoManx at 8:21 PM No comments:

I Jump Into 2nd Kyu

I took the 2nd Kyu test today, and I have the video from my trusty “bloggie” to prove it. Sensei said I and the 3rd Kyu first act passed. I think Sensei didn't drag the test out too long since he has seen me practicing before class for the past few weeks and I was doing all the techniques listed. So he must have cut me some slack.

But, when you do something like this you want to have it all down rock solid. If I really wanted that, I suppose I could have waited until some later date. But I kind of like the feeling of diving in whether you are ready or not and hope you rise to the occasion. Using an old photo developing analogy...After watching as much of my test as I could (who was the fat old guy wearing my gi?) I can say although I didn't shine, I managed a fine no gloss finish with only a few scratches on the final product. Then again I have never been a perfectionist and others were quite harsh on the quality of those old one hour photo developing places. But enough about developing film, that is so 20th century.

One aspect of the practice that I find fascinating is just the psychology of taking a test. Yes, I want to be good at Aikido and do well on these tests, but actually I think I savor this feeling of being in over my head. Where is the glory in taking a test if you are kick-ass already? And I am almost always in over my head. It is not self modesty when I say I am really not very good at Aikido. I see and feel my clunky clumsiness and after 5 years I kind of doubt I will smooth out a many of these rough edges. But it kind of doesn't matter.

For me the Aikido practice is about something other than being a Aikdo master. I will genuinely try to always improve but I am not in it to show all the cool stuff I can do. I am there to participate. Participate in the experience, in the techniques as Uke and Nage and feeling the “magic” of those times you say “What the hell just happened? That was cool!”. And test taking is just another experience you get to take part in.
The sensation of sitting there just before the test starts...it is like jumping out of an airplane, which I have only done once but I think it is somewhat appropriate to compare these things. BUT the dojo is a pretty safe environment where the worst that can happen is you fail the test and try again some other time.

That said, I have to admit that if I want to take the next test and certainly the shodan test (black belt), I really do need to nail down the specifics on all these techniques. To the point it won't matter if my mind goes blank when Sensei calls the technique, like what happened this morning. And I automatically remember those basic details like going lower for koshi nage on somebody my height or shorter. Sooooo....there is tons more work to do and I'll keep at it, but if it takes me another 5 years to feel ready for shodan test I'll almost be 60 years old. And even if 60 is the new 50, it sounds old to me.

The video is somewhat similar to my one skydive jump way back in 1980, except I had a static line and no jump-suit and helmet. I wore my standard gear of the time, jeans, red wing boots, t-shirt and a jeans jacket.

As I remember it, all the thrill was the anticipation and stepping out and holding onto the wing strut. The descent itself was a little anti-climatic, well except for the last 5 seconds before I hit the ground.
Posted by ZeppoManx at 6:23 PM 1 comment:

What Was My Point??

I ran through most of the standing techniques for the 2nd kyu test this morning before class. I most had the mechanics of down but getting them to actually work work is still out of reach, At this point I kinda want to take the test as an example that you don't always pass the test. Or if I pass I will be an inspiration to chubby middle aged men.

Perhaps intending to help me out Sensei had us work on on t of the techniques for my test , shomenuchi shiho-nage and later shomenuchi nikkyo.

Ok, I can't seem to find the point of this post,,,so the above is just another Christian Tissier video,
Posted by ZeppoManx at 10:45 PM No comments: 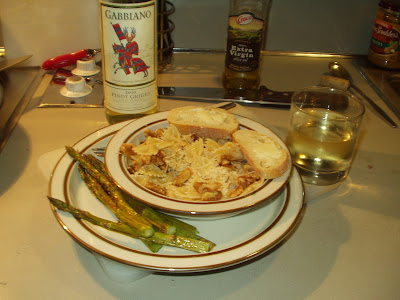 As we prepared to leave Aikido tonight (great class, Shawn did wonderfully) I couldn't help but notice that Bibliosk8 was even more slim and trim. He talked about his no or low carb diet and how well it worked. And the moment he said he cut out pasta and bread my mind imagined it and it tasted soooo... great in my mind's mouth.

I must be a marketers dream. No need for clever advertising, just say the thing I like in any context and I want it.

And driving home I kept thinking some Pinot Grigio would be really nice with the bread and pasta. I threw in some quickly roasted Asparagus as a nod to my healthy fellow Aikidoka.

OK, tomorrow, or next week, THEN I will get on my custom diet I developed last year which is basically a no carb, no beer or wine, week long diet and do whatever you want on the weekend. which actually matches Bibliosk8's version except I leave out the meat.

But then again, there is some stressful stuff going on and I seem to seek solace food an drink. We will see.
Posted by ZeppoManx at 11:20 PM No comments:

Newton Goes to the Big City

Newton and the Counterfeiter: The Unknown Detective Career of the World's Greatest Scientist by Thomas Levenson


Who knew that Newton spent the last 25 years away from Cambridge and a good portion of that time he was “Master of the Mint” and in charge of overseeing the production and security of England’s money supply.

The author does a nice job making reasonable speculations on why Newton's previous pursuits prepared him to be an ideal candidate for fixing England’s coinage problems. I particularly liked the notion that Newton was not unaware that his discoveries about the nature of the universe might lead some away for belief in God, and that was why he spent decades secretly investigating Alchemy. Somehow he got the notion that Alchemy would prove the existence of God and that fueled his determination to crack the alchemy puzzle. As we all know now that whole turning base metal in to Gold didn't take off so well.

In any case he was as rigorous an alchemist as he was in his other more traditional scientific pursuits. And since he was forced to hide his alchemy studies he had to do most of the mundane tasks like melting different metals for himself. This was just the sort of knowledge that would come in handy when he is in charge of re-minting ALL of England’s coins.

It tuns out the coin minting standards of the day enabled industrious counterfeiters to have a pretty good time. The job of overseeing coining was determined by contacts and not competence and it seems if a crook was smart enough to figure out how to copy coins they often managed to talk their way out of the gallows (counterfeiting was a capital offense)

After Newton got the job I it must have been a sight to see a con man trying to bamboozle with faux complexity the man who created Calculus. And the idea of one of the smartest men in history turned into detective on the scent of villains is inherently fascinating

Anyway, an interesting story with believable insights about a brilliant man who died almost 300 years ago.

View all my reviews
Posted by ZeppoManx at 10:52 PM 3 comments: