A Night at the Symphony 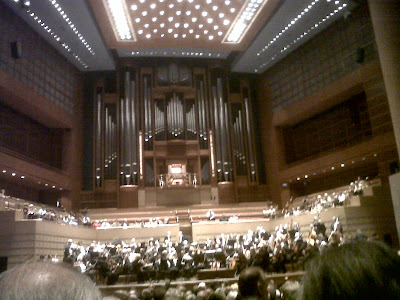 I didn't know I liked DVOŘÁK so much! Plus it was a treat to watch the organist dance around the pedals

The picture was taken BEFORE they told us we couldn't take pictures so I just got in under the wire.

Posted by ZeppoManx at 11:04 PM No comments:

Last night Sensei wanted us to realize that Aikido should be approached from different angles. Meaning we shouldn't try to force our idea of a technique on an attack, rather when we sense resistance the idea is to change your approach. So much of the night we worked on feeling the force of the attack. Then he went on about changing out responses to attacks and how it was like Neuroplasticity. Or something like that.

The start of the process is to recognize what is happening in the attack and NOT respond in kind but find a different path (like the brain making new response paths in the brain). Here he used the example of how people shake your hand when meeting you. You can learn a lot from the energy in the handshake about how you will need to interact with them. Will they be aggressive or overly sensitive, and stuff like that.

The thing is we are wired to fight force with force, it is the most obvious way to respond. If somebody pushes you we thing the most logical thing is to push back. He wanted us to realize that part of the essence of Aikdo is that like Neuroplasticity, it means changing ways of thinking and doing (my paraphrase).

Along those lines in Sensei's closing remarks, the gem he gave us was that the very notion of an attack should be dealt with by changing your perspective.(letting your brain find a new path), meaning if you accept an attack as an “attack” we are wired to respond in kind. But if you accept the attack as a gift. The more force it has, the more you are given to work with, and in a kinder world you lovingly redirect him to neutrality. Then went on to say this is a way to view social conflict away from the dojo.

I really like the notion, but of course I think there some Aikido-ists that accept the “gift” but then use their new found weakness and apply their own violent attack.
Posted by ZeppoManx at 8:20 AM No comments:

End of the World!! Averted!!

The Last Days of Madame Rey: A Stephan Raszer Investigation by A.W. Hill

I found a blog with this quote from the book and it grabbed me enough that I checked it out of the library on the way home that night.

"And what had the books taught him? There was this: something had gone wrong. Eons ago-not just in “real time” but in the clockwork of the human soul. Something violent and sacred. It could rightly be thought of as a crime, and though it was recounted in all the myths of our species, it was yet the best-kept secret in the Universe."

I enjoyed it. It was a pleasant read with enough at each step to make be want to find out what happen next. But the secret of the Universe was kind of a let down. There is also a thread about ancient people having tails and the genetic descendants of these more perfect predecessors can be identified by examining their tailbone. Odd, and I am a little unclear where us normal people fit into the cosmic battle Raszer get involved with.

And who are the bad guys in this book?

"I think what we’re looking at is a private international strike force... an Armageddon scenario bankrolled by the world’s most lethal venture capitalists."

Now THAT is bad.

Throw in a sex scene and some light but happy drug use and you’ve got yourself a story.

View all my reviews
Posted by ZeppoManx at 1:06 PM No comments: