A Hinge Not In Time 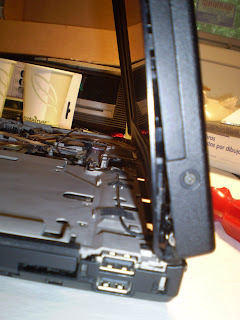 The right hinge (stage right) on my ThinkPad broke.

The warranty expired after one year and I've had it for over two years, so unless I wanted to drop a few hundred dollars it was up to me to fix it. (as an aside I tend to keep computers for a really long time, and make them do things they shouldn't be called upon to do because they are too old)

The good part is that Lenovo publishes all the manuals and part numbers so I could find out what the part number was and Lenovo also publishes videos on how to take your ThinkPad apart. But ultimately the guide and a printed out section of the service manual that helps.

The Lenovo site is http://www.lenovoservicetraining.com/ion/

Then I spent 2 to 2 ½ hours installing the two hinges.

Here is the broken right hinge 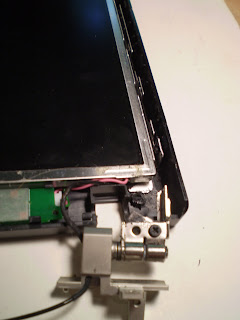 And here is the left good and bad left hinge 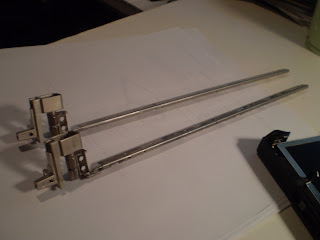 I replaced them both as the left hinge had a wobble.

I put it all together and aside from the 4 left over screw all went well and I can open and close with impunity!

And I have to say once you have the instructions the design of the think made it pretty easy to effect the repair.

I also found that the wire from a connection on the main section to the wireless antenna was either already broken or taking the LCD off broke it. 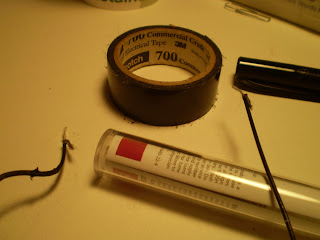 I pulled out the soldering iron which I really don't know how to use, and slobbered on some solder, wrapped it in tape and jammed it back into the lid frame.

I don't know if it is better, worse or the same. But it still works.

Posted by ZeppoManx at 8:36 PM No comments:

I've attended Aikido regularly since my motorcycle trip but for some reason I just have not felt the impluse to blog about it.

Last Monday we worked on tanto dori (wooden knife attacks) and not much to say on my part except that since the one brown belt there hurt his back I was the most senior student so I ended up being uke for Sidney Sensei for the whole night. I still feel a bit like an impostor, just too much of a beginner.
Posted by ZeppoManx at 8:59 PM 2 comments:

The Not So Wonderfull Land of OS 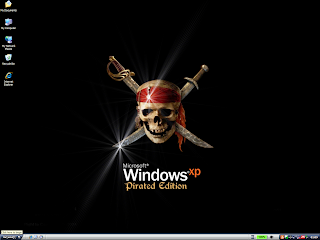 So I think I'm pretty sharp now with my ubuntu ThinkPad.
I think I know what I'm doing.
So I decide I will install a Windows OS now, on the drive with the already installed Ubuntu Operating System (OS).
Well..."they" are right. It is easier to install Linux for a dual boot if you put the Linux on second.

In tring to fix the master boot record (MBR) so I could start the dual boot menu, somehow I ruined the partition table and made both installation unreadable.

Sooooo...I had to start ALL over with Ubuntu AND Windows. But it means I have relearn how to get my digital video camera working in Ubuntu.

Many, many hours of work, which is a bit silly because I have my old perfectly fine Hard Drive in my bag. But I want to see if I can live (mostly) in the Ubuntu world.

By the way I never got a disk for my Vista OS but fortuanately I was gifted with a registered XP CD.

On a completely unrelated matter, the picture above is from the desktop of a pirated version of XP which I found on the net while searching for ways to dual boot.
Posted by ZeppoManx at 1:12 AM No comments:

What Would Napoleon Do For A Newer “Rosetta Stone”? 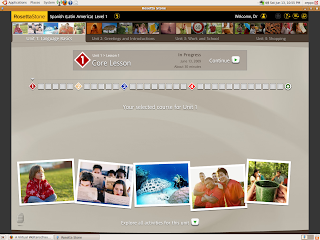 While investigating installing Rosetta Stone on Ubuntu I discovered there was new version (#3) and from what I can tell it looks pretty different. But apparently they expect you to already have learned a language once you purchase your CDs, since there is no upgrade. It seems you have to spend $500 to get the new version even though you already gave then a few hundred dollars already.

You could argue they should give the new “better” version for free since you didn't learn from the old version. But probably not.

However it turns out a little investigation shows a slightly unscrupulous person can easily find a complete edition of a “cracked” new version online and...well for free.

I can't help but feel that some people with weak moral fiber might be mightily tempted to go the free route after discovering their previous purchase means nothing to the manufacturer.

In any any case the above shows a screenshot I found of the new version.
Posted by ZeppoManx at 11:19 PM No comments: 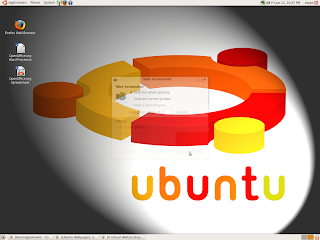 I was a able to run DVD Shrink on my Ubuntu OS through WINE to start step one of a backup of a movie DVD. This created the Video_TS and Audio_TS folders with the needed files to create an ISO image of the DVD.

But IMG Classic would not run under WINE so a bit of Googling I found out the command to create an ISO file from the audio and video files created by DVD Shrink...

where the last part is the folder just below the one you start the command with in the terminal window.

THEN I had to find DVD burning software to make a DVD from the ISO image. I would have thought all this would be part of a normal installation of Ubuntu. But I guess you have to look for such things in the Windows world so maybe it not so strange at all. The ISO to DVD disk software I used was Brasero.

1. DVD Shrink (Windows app in WINE)
2. mkisofs (commands in a terminal window)
3. Brasero (to put the ISO on a DVD)

Anyway it all worked out and it is only a little bit more complicated than in Windows, but maybe I can simplify it later.
Posted by ZeppoManx at 10:46 PM No comments:

Aikdio, but who's counting, not me! 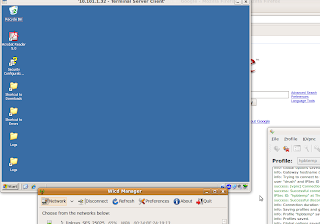 At Aikdio last night I discovered I had not noted my attendance for over two months.

I ended up with a spare SATA hard drive for my Lenovo R60 and formatted it with Ubuntu. Linux is lightyears beyond the installation from when I first played with it maybe over 10 years ago. I remember downloading may dozens of 3 ½ inch floppies for slackware and then having to recompile the kernel time after time. And all the pain of getting the modem, printer and sound card to work. It took weeks and weeks, and then I would simply go back to Windows.

The Ubuntu installation was pretty darn good, but I did have to do some Googling to find out how to get my wireless to work (an amazingly simple fix)

Tonight I got my digital video to work with the Ubuntu video editor and then I finally got a VPN connection going to my work network. The vpn was a little bit of a challenge but it works pretty well now.

I found that Manga studio (Windows edition) works with WINE and I read online that you can also get DVD Shrink and DVD Decrypter to work in WINE. And I need that to make my DVD “backups”.

I may go back to my Vista disk but I'll see how long this Ubuntu installation keeps me satisfied.

The picture is a screen shot of the
Posted by ZeppoManx at 10:51 PM No comments: I went to the Houston Museum of Fine Art. Above is a sketch... below is the real thing
here
Posted by ZeppoManx at 10:32 PM No comments:

Time, time, time, see whats become of me
While I looked around
For my possibilities
I was so hard to please
But look around, leaves are brown
And the sky is a hazy shade of winter
-P. Simon

Well...it has been two years since I started blogging and I have no conclusions about the whole affair.

I feel the premise is still appropriate in that we have a finite time alive and one might reasonably think it appropriate to ponder how to spend the remaining time one has. Especially if the odds are that you are already well past the the midpoint of life and maybe into the last quarter.

That said, I look back on those halcyon days just after my 50th birthday and wonder how I could be so naive. How strange I thought I could find the answers to life by simply getting some new hobbies. Even though I may continue on in these interests I'm taking them off the mast head of this publication

But even now I must admit I don't know that it is such a bad idea to spend your time investigating things you are interested in. BUT interests wane and energy fades so you are left with nothing. I am like a ping pong game, for suddenly I'm on the other side of the table and thing “you enjoy a good book and a nice glass of wine, why not simply uncork, read a book and relax."

In the depths of my mind, my western view of time ticks its way toward me...time..time, time...see what's become of me.

Maybe we will meet again some sunny day; Like tomorrow perhaps.
Posted by ZeppoManx at 9:18 PM No comments: